Fishing Lake Powell is about as good as it comes. Not only can you fish in the lake,but also in the nearby quality waters of the Colorado River below the Glen Canyon Dam.

On the lake side there are large-mouth and small-mouth bass, striped bass (better known as stripers), crappie and walleye. In the river are trophy size trout.

When I was a young man in my twenties, I lived in Albuquerque, NM. I loved to fish, however,the nearest lake was a good 100 miles away. But, I was young and gas prices were nothing like they are today, so I would go as often as I could.

I really didn't know much about what I was doing and more often than not would come home empty handed.

Over the years, I got interested in other activities and pretty much gave up the sport. From time to time,I would pick up a magazine like Field and Stream and think about giving it a try again. But I would remember my lack of success and that would dim my enthusiasm.

So what does any of this have to do with fishing Lake Powell?

Well, I guess the moral of the story is that I would have loved to have been within reasonable driving range of Lake Powell and have had the opportunity to fish with experts like Wayne Gustavasen, fishing guide and Webmaster of Lake Powell Fishing Information.

Perhaps, I would still be a fisherman today and could share with you all kinds of firsthand knowledge, fishing tips and techniques. Instead, I’ve done a lot of research on the internet and at the library and will relay on these pages some of what I’ve learned from people who are the experts.

The information presented here is aimed toward the novice fisherman and/or those new to fishing Lake Powell. Those who are familiar with the lake, I am sure, know all the best fishing spots and how and when to fish them.

Since there are different limits for different kinds of fish, it is important to be able to identify the fish you have caught. The Utah Department of Natural Resources has graciously allowed me to download and use the pictures and descriptions of fish from the 2011 Utah Fishing Guidebook. 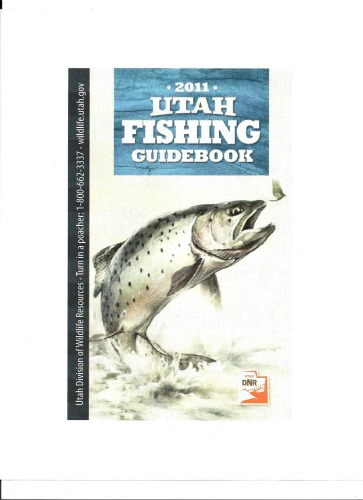 This is a great guidebook, and I urge everyone fishing in Utah to download a copy. I have provided a link at the bottom of this article.

Colorado River cutthroat trout are native to the Green and Colorado River watersheds and are noted for their brilliant coloration. The males, in spawning condition, have bright crimson stripes along the sides and the stomach. Spotting is usually concentrated toward the tail area.

This species of char has a background color of gray-brown, overlaid with light spots that vary in intensity with age and environment. The background color covers the back, sides and fins, highlighting the lighter gray spots. Lake trout in large lakes are sometimes so silvery that the spots are difficult to see. Spotting is usually more intense on small fish. The caudal fin is deeply forked. The mouth is large and features strong teeth on both jaws.

This species of char may be olive to blue-gray on its back and white on its belly. Red spots, usually with bluish halos around them, are present on the sides. Colors can vary greatly, depending on whether the fish lives in a stream or a lake. Characteristic light wavy marks on the back are a distinguishing feature. The obvious white-and-black striping pattern along the front edge of each of the lower fins makes it easier to distinguish brook trout from other trout species. The caudal fin is squared or lightly forked.

Prominent sharp teeth distinguish this big perch from its smaller cousin, the yellow perch. Walleye are a brassy olive buff color that sometimes shades to yellowish sides and a white underbelly. There is a large, dark blotch at the rear base of the first dorsal fin, and the lower lobe of the tail is white-tipped. The tail is moderately forked. 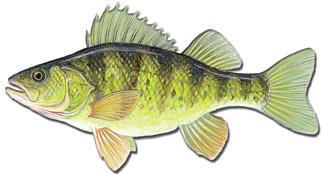 Yellow perch are yellowish with dark vertical bars. The caudal fin is forked, and the dorsal fin is divided.

Striped bass coloration ranges from bluish-black to either dark grey or olive-green above. Their sides are silvery and their bellies white. Striped bass have seven to nine unbroken stripes along each side. The body is somewhat streamlined. The mouth is oblique, and the lower jaw longer than the upper. The dorsal fins are clearly separated. The caudal fin is forked.

The back of a white bass is usually grey, charcoal or green. It typically has silvery sides and a white belly. It also has five to seven longitudinal stripes on each side. The body of a white bass is deeper and less streamlined than that of the striped bass.

The head of a largemouth bass is large and long. Its mouth is also large, with an upper jaw that reaches past the center of the eye in adults. The upper parts of the body and head are greenish, with a silvery or brassy shine. The belly is white to yellow, and there is an irregular dark stripe along the sides. The eyes of a Largemouth bass are brown.

Adults are blackish, dark olive or dark brown on the back. The belly is greenish-white or bright yellow. The tail is not forked. 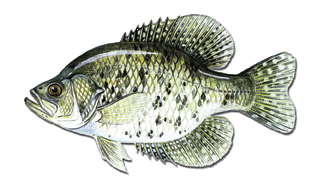 The crappie has two closely-joined dorsal fins. Crappie are silver-olive with numerous black or green splotches on the sides. Vertical bars, prominent in the young, are absent in adults. Their sides are light, iridescent green to silvery. The belly is silvery to white. Pelvic fins are opaque with some black on the tips of the membranes, and pectoral fins are dusky and transparent. 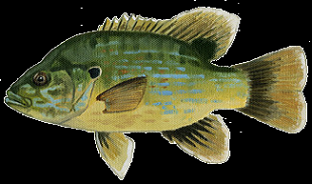 Green sunfish are brassy-green or blue-green on the back, ometimes with metallic-green flecks and dusky bars on the sides. The flap over the gills is a dark color. 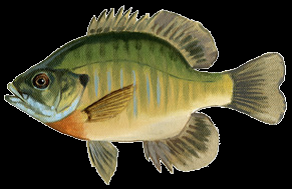 Bluegill are shorter, deep-bodied fish, whose name comes from the dark flap over the gills. The body is olive-green with vertical bars, and some blue and orange may be present.

Northern pike are characterized by a long, slender, torpedo-shaped body. They have a pattern of light-colored markings on each side of the body that form seven to nine horizontal rows on a dark background. The tail fins are rounded at the ends. The northern pike differs from other similar species in having fully scaled cheeks.

The Utah sucker is dark olive to copper, with dusky fins and a downward-facing mouth. 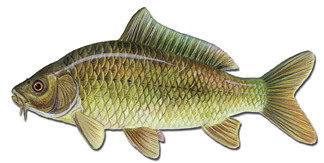 Carp have deep, thick bodies that are gray to brassy green or yellowish green. The body is normally covered with large scales, and carp have fleshy barbels on each side of the mouth. A large spine is present at the front of the dorsal (top) fin.

The above was downloaded from the 2011 Utah Fishing Guidebook, Courtesy of the Utah Division of Wildlife Resources. Any errors or discrepancies are mine. Links to sites referenced above: