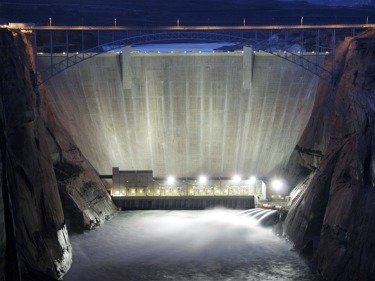 Glen Canyon Dam At Night
Photo: US Bureau of Reclamation

Glen Canyon Dam: why do some men loathe and hate it and refer to it as “the biggest mistake of my life,” or as being “sinful ugly”?

Did it not live up to its promise to provide clean hydroelectric power, to tame the wild and muddy Colorado River, that some called Big Red?

Of course it did. It fulfilled all those promises and more.

How Do You Feel About
Draining Lake Powell?

But, the bad rap against Glen Canyon Dam is that the clean, blue, sparkling waters now behind it, filled the canyons that John Wesley Powell described as,

“…a curious ensemble of wonderful features…carved walls, royal arches, glens, alcoves, gulches, mounds, and monuments,” and Elliot Porter described as The Place That No One Knew.

The water of Lake Powell drowned ancient cliff dwellings and artifacts which for hundreds of years silently reposed in alcoves carved from sandstone walls, and whose stories and mysteries must now and forever remain untold.

It destroyed places of solitude and solace, places that Katie Lee said,

“…changed my life… resurrected my spirit and melted my heart with their beauty….”

And, in so saying, she left the river and the canyons and never revisited them.

Yes, Glen Canyon Dam is guilty of all of those things, and I, too, mourn with others that so much beauty, so much ancient history has been forever lost. ﻿ 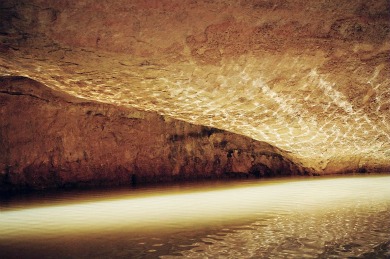 I, too, weep for the loss of some of my secret places; places that I must now share with others.

I liked having them to myself. They were mine. I found them.

They belonged to me, and like a small child with a new toy, I didn’t want to share.

But, the world is growing smaller. More and more people now have the means and the leisure to travel the world.

As our populations increase, and our wilderness areas decrease, there are fewer places that we can call our very own.

We no longer can make a propriety claim on any part of our public lands. They belong to all of us and we are obliged to share.

Yes, I mourn the loss of such magical places as Music Temple which John Wesley Powell described as,

“… a vast chamber, carved out of the rock…doubtless made for an academy of music by its storm-born architect…” 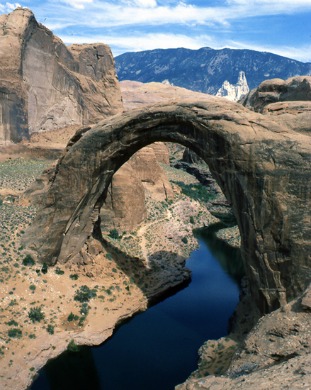 But I rejoice that because of the dam, millions of people can now see, marvel at, photograph and enjoy such wonders as Rainbow Bridge; they can now visit and explore the many canyons that for so many of them would have been inaccessible.

I rejoice that my wife’s parents, who in their 80’s, were able to take a boat tour of the lake and see and marvel at the beauty and splendor of immense sandstone walls painted by Nature’s palette; a place that L.F. Wylie, project construction engineer for Glen Canyon Dam called “…an area unmatched for scenic beauty.” A place where:

"…Nature’s paintpot has splashed the panorama with colors ranging the spectrum from Vermillion Cliffs to chalk-white Castle Rocks, with changing colors each hour of the day…."

“…Over eons of time, wind and rain have carved the sandstone into shapes to please ten thousand eyes.

The graceful, the dramatic, the grand, the fantastic. Evolution into convolution and involution.

But, Glen Canyon Dam has been a bone of contention, a source of controversy even before the first bucket of cement was poured.

Jedediah Rogers, with the Bureau of Reclamation, said it best in his treatise Glen Canyon Unit:

“Few, if any, large-scale reclamation projects have generated as much controversy and emotion as Glen Canyon Dam and its reservoir, Lake Powell.” 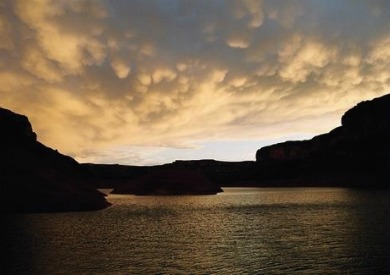 And now that the dam has been built and 254 square miles (660 km) are now under water, the controversy continues.

There are those who would drain the lake, maintaining that the land would be restored to its original native pristine beauty and splendor.

“ As of January 2005,” according to the Glen Canyon Institute, “water levels at Lake Powell Reservoir are down below 37% of full, exposing forty miles of the Cataract Canyon, nearly a dozen new rapids, and hundreds of miles of side canyons all the way down to the dam.

The recovery of these emerging canyons is occurring at an astonishing rate….

…The current drought and low water levels at reservoir Powell have provided a definitive answer to one of the most common questions:

NO! It is truly remarkable how quickly the reemerging side canyons of the Glen are restoring...."

It is worth noting that if Lake Powell were down 37% below full, the water elevation would have been 2,331.

However, according to Water-Data.com, the water level has never been lower than 3,409 which was on March 14, 1963, six months before the dam was officially completed.

The southwest is an arid country, and the lake levels fluctuate from season to season, and from year to year; its levels are dependent primarily upon evaporation, outflow from the dam and runoff from rain and snowfall. 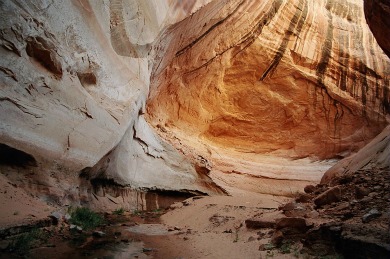 But, the point is well taken.

In drought years, the level of the lake will drop and land that is currently under water will become exposed again.

A good example of this is Cathedral in the Desert, which was exposed in 2005.

We are, each and every one of us, the sum of our experiences.

For Colorado River runner, wilderness guide, environmentalist, and one of the original members of Friends of Glen Canyon, Ken Sleight has spent much of his life in and around Glen Canyon.

He has experienced firsthand the solitude and indescribable beauty of the canyon before it was inundated with the waters of Lake Powell.

He knew the canyon like few others. He knew it as a pristine wilderness.

Is it any wonder he feels so strongly against Lake Foul, as he calls Lake Powell?

His whole way of life was changed with the flooding of Glen Canyon.

I envy him his experiences, his idyllic way of life. What could be better than living each day doing the things you love, surrounded by:

“… hundreds of amphitheaters, alcoves, tucked away in the cliffs, shadowy, full of maidenhair fern, the dripping springs, the green in the yellow rock — the greenery, the fragrance…”

But, we were not all cut from the same cloth.

Some of us were destined to become clerks, accountants, teachers, lawyers, doctors, carpenters, plumbers and, yes, even builders of dams.

Each of us is a product of our environment, our teachings, our physicality and our heritage.

Again, we are the sum of our experiences. 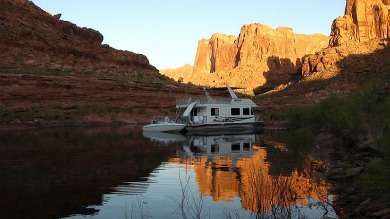 My experiences and your experiences shape who we are and what our attitude is toward the dam and Lake Powell.

Had the dam never been built, I would have missed out on so many wonderful experiences:

• My first boating/camping trip was on Lake Powell.
• I marveled at the awesome beauty awaiting us around every turn and twist and bend as we explored some of the travertine sandstone canyons.
• I learned to water ski on Lake Powell.
• My first trip aboard a houseboat was on Lake Powell.
• I saw the radiant smiles of happiness on the faces of my wife and grandchildren and cherished the sounds of their joyful laughter as they frolicked in the water.
• I first heard my granddaughter, an accomplished flautist, play her flute one quiet, enchanted, magical evening under the stars at Lake Powell. 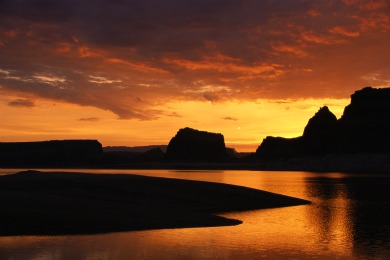 What wonderful, unforgettable experiences; experiences I shall cherish the rest of my life.

Yes, I appreciate the fact that the lake is gradually filling with sand and silt, and that in 200 to 700 years the lake will be no more.

Maybe global warming will dry up the lake even sooner. Who knows?

I am aware that beneath the water of this beautiful lake are spectacular canyons and treasures and relics of the ancient ones, the Anasazi.

But for now, the lake is here for me to enjoy, luxuriate in and savor all that is above the water.

To Drain or Not to Drain?
That is the Question!

Even before construction on Glen Canyon Dam began, it was steeped in controversy.

There were many opponents who felt the dam should not be built and their passions ran deep.

They pointed to the pristine wilderness of Glen Canyon and bemoaned the loss of such magical places as Music Temple, Cathedral in the Desert and Outlaw Cave.

But, just as passionate were those proponents who felt that building the dam more than justified these losses.

They talked about hydroelectric power, taming the Colorado River and providing much needed water to thirsty lands.

And, now that the dam has been built, and each side has seen their predictions come true, there is talk about draining the lake and returning it to its natural state.

My question to you is: Should Lake Powell be drained?

I would like more than just Yes or No.

I want to know why you feel the way you do;
maybe some personal experience that has shaped your conviction, pro or con.

Also, I would love to see and share your photos.

What Other Visitors Have Said

Click below to see contributions from other visitors to this page...

Water Under the Bridge