Back from the future, the Jetlev is one of the new revolutionary water sports toys to sweep the country.

Looking like something out of a Buck Rogers or Flash Gordon comic strip, this Sci-Fi-like water-propelled apparatus can propel a rider, safely secured to an ultralight backpack, up to 30 feet above or below the water.

In level flight, it can approach 30 miles per hour.

This inventive design consists of two separate units, the jetpack and the boat unit.

The Jetpack is like a backpack with a seat, handlebars and a foot rest called a trapeze.

The boat unit is essentially a jetski body with an marine engine capable of pumping over 1,000 gallons of water per minute and generating over 420 pounds of thrust.

The two units are connected by a 4 inch diameter, 33 foot hose.

Water is pumped from the boat unit to the jetpack through this hose .

When the water reaches the jetpack, it is directed through 2 nozzles at up to 60 psi.  It is this thrust which propels the Jetlev.

Aiming the nozzles creates smooth, stable turns and the motorcycle-style throttle allows the pilot to climb, dive or hover. 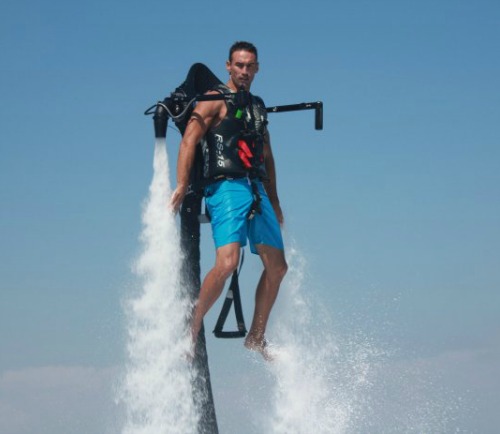 The Jetpack has an ultralight fiberglass composite backrest, an “Easy Ride” pilot seat for improved comfort and support, a five-point safety harness with quick release, handlebars and foot rest.

The seat, arms and foot trapeze are adjustable to accommodate different size fliers.

The jetpack by itself weighs 30 lbs. and with its built-in positive buoyancy, will float, so there is no worry about it sinking to the bottom of the lake or river should it fall overboard.

The boat unit, which provides the thrust for the jetpack, is similar in size to a personal watercraft (PWC).  It is 127 inches long, 48 inches wide, 27 inches high and weighs 649 pounds.

It has a fuel capacity of 22 gallons which equates to 3-4 hours running time.

For more information on this historic flight, Click Here.

Video - How It Works

For a great video introduction to the jetpack, Click Here.

The jetpack's 5-point quick-release harness, protective backrest and head support, safety saddle and inherent floatation are just some of the many safety features. 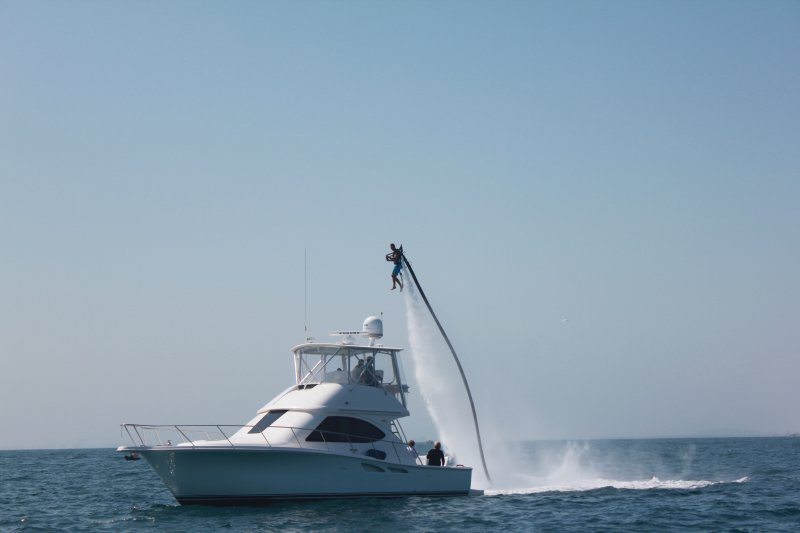 “When I was 14 years old, I watched James Bond fly a jetpack in the movie “Thunderball,” and I have dreamed of flying one ever since. However, after decades of patiently waiting, jetpack technology didn’t get any closer to mainstreaming personal flight … so, I decided to invent a machine that would.”     Raymond Li, Inventor

Sometime in the year 2000, Raymond Li, a Chinese-born Canadian from St. John’s Newfoundland, took the first step toward the achievement of this dream.

He sketched a proto-type of the Jetlev on a yellow Post-it, but for three years he didn’t do anything more with it than to keep it somewhere in the back of his mind.

Finally, in 2003, he decided to follow through with his dream and began extensive research, concept development and testing.

In 2004, with assistance from the National Research Council of Canada, Ray conducted a series of unmanned flight tests.

In 2005, Ray Li relocated to Dania Beach, FL where he and his “… crew of daredevil engineers and test pilots cautiously initiated the first in a succession of meticulously planned, manned flight tests.”

The first fully operational prototype was completed in August 2008 and for the next three years the team worked to perfect it.

In early 2012, after “…hundreds of flights, thousands of hours and countless modifications…” Li launched the R200.