Sleek and Futuristic, the Jetovator looks like something out of a SciFi movie.

In fact, I am reminded of the Speeder Bike Chase in Return of the Jedi where Luke Skywalker and Princess Leia are being chased through the forest moon of Endor by Scout Troopers.

The brain-child of Rob Innes and Dan Piazza of Innespace Productions, this water-propelled flying stunt bike has been described as a cross between a dirt bike and a stunt plane.

To avoid redundancy when referring to this exciting PWC accessory, I will use both Jetovator and bike.

This amazing bike does not have its own power source; rather, it is dependent upon a high-output personal water craft (PWC) to supply the power.

A thrust adaptor is connected to the jet unit of the PWC which redirects the thrust 180° to the front of the PWC.

A 40 foot hose is then extended from the thrust adaptor to the bike thereby redirecting the water thrust from the PWC to the bike.

The thrust adapter can be easily installed and removed, allowing the PWC to still be used as normal.

It is this water thrust which is used to propel and elevate the bike up to 25 feet into the air at speeds of up to 25 mph or allow it to dive 10 feet below the water.

In the hands of an experienced “pilot”, aerial stunts such as twists, barrel rolls and back flips can be easily performed.

It is recommended that only skilled riders attempt these freestyle tricks and that they do so in a safe environment clear of any other people or boats.

See The New Age Jetovar Video On You Tube 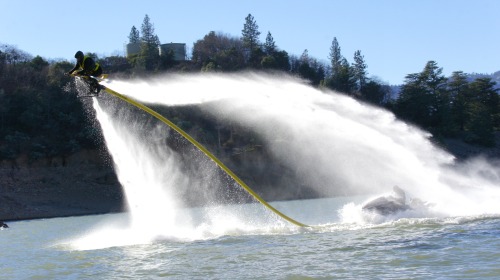 Presently, the operation of this unique water accessory requires two people to operate it: an operator on the PWC and the rider on the bike.

Generally the throttle is set at 80% of full power and left there until the rider is ready to come down.

Direction of the bike, both vertical and horizontal, is controlled by the bike rider using two hand-held control sticks which redirect the water thrust of the two front nozzles.

Having a trained operator on the PWC is a great safety feature in that the PWC operator acts as an extra set of eyes to prevent “close encounters” with other boats or objects in the water.

Any powered water sport is inherently dangerous and carries some risk. The Jetovator is no exception although it has been thoroughly tested and is considered to be very safe.

Safety is such a paramount factor with the Jetovator dealers that every purchase must complete a Level 1 Training Course where they are taught the safe use of the bike as well as how to assemble and maintain it.

If the bike is to be used commercially, all instructors much complete a Level 2 Training Course.

It is recommended that all users wear a full-faced helmet and Coast Guard approved lifejacket both of which may be purchased with the bike.

According to Jetavation, Inc ” … just about anybody can operate it safely and proficiently in twenty minutes.”

The Jetovator was recently featured on Travel Channel’s “Ride-iculous” and is a great illustration of how easy it is to operate the 35 pound bike.

The Jetovator is made by Jetavation, Inc located in northern California and has several distributors scattered throughout the United States and abroad.