Don't Be Caught Dead Without One

When most people who are not boaters think of PFDs or lifejackets, they think of those heavy, bulky, uncomfortable life jackets they see in old war movies, or the equally old Mae West CO2 inflatable vest named after the buxom Broadway and Motion Picture star Mae West.

Today’s lifejackets, or Personal Flotation Devices (PFD) as they have come to be called, have entered the 21st century.

They are light, bright, durable, comfortable and innovative.

A case in point is the “Sea-Tee”, a standard rash-guard shirt that many water sports enthusiasts are used to wearing - but with a twist.

It has a built-in inflatable bladder similar to most inflatable life jackets.

According to Jeff Betz of the Troy, NY based Float-Tech Inc., whose "Sea-Tee" design was the first place winner of the 2011 “Innovation in Life Jacket Design Competition” as quoted by BoatUS Foundation:

"The Sea-Tee is a thousand times better than traditional life jackets for many of the activities people engage in on the water.

Most life jackets are designed to standards that are meant for offshore conditions, but most boaters are on calm inland waters.

Jackets built to 100 percent of the current standards - but not worn, are zero percent effective.

So with the Sea-Tee you can wear essentially the same shirt you're used to wearing on the water, and have the back-up of a buoyancy in case of an emergency."

The biggest problem today and the one which accounts for most boating fatalities is that people do not wear a lifejacket or PFD while boating.

According to the Personal Flotation Device Manufacturer’s Association:

“Nine out of 10 drowning occur in inland waters, most within a few feet of safety and involving boats less than 20 feet long.

Most drowning victims had access to a Personal Flotation Device, but did not wear it.

A wearable PFD can save your life – if you wear it!”


• All boats must carry at least one Type I, II, III or V U. S. Coast Guard-approved PFD for each person onboard or being towed. If a Type V PFD is used, it must be approved for the activity at hand.

• All PFDs must be in good and serviceable condition and be readily accessible.

• The PFDs must be of the proper size for the intended wearer. Sizing for PFDs is based on body weight and chest size.


• The quantity and type depends on the length of your boat and the number of people onboard and/or being towed.

• Each PFD must be in good condition, the proper size for the intended wearer, and very importantly, must be readily accessible!

• Readily accessible means it should not be stored, covered or hidden away somewhere, and you must be able to put the PFD on in a reasonable amount of time in an emergency (boat sinking, boat on fire, etc.).

• PFDs should not be stowed in plastic bags, in locked or closed compartments or have other gear stowed on top of them.
• On all boats longer than 16 feet long, you must also have a Type IV throwable PFD. For example: If four people are on your 16-foot boat, you must have at least FIVE PFDs – Four wearable PFDs and one throwable PFD.

• The throwable PFD should be readily available. i.e. it should not be stored, covered or hidden away somewhere.

• Each person onboard a boat within 800 feet below a hydro-electric dam and/or navigational lock and dam must wear a Type I, II, III or V U. S. Coast Guard-approved PFD. 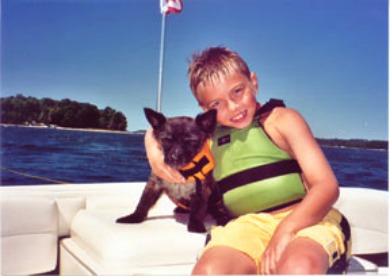 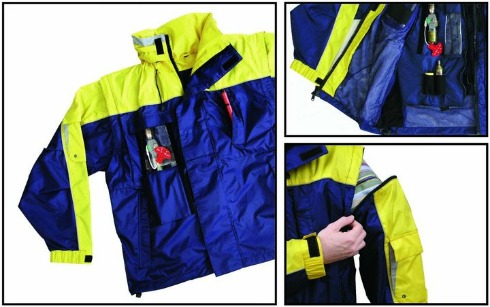 Inflatables contain a CO2 cartridge which, when activated, inflates the vest.

They come equipped with a ripcord which, when pulled, activate the CO2 cartridge thereby inflating the vest.

The manual models do not inflate upon contact with the water. Rather, the user must pull the ripcord to inflate the vest.

Both the manual/automatic models and the manual models have an oral inflation tube which can be used to maintain buoyancy.

Once the vest has been inflated, the old cartridge must be replaced with a new one.

The USCG requires that the vests be equipped with indicators which show when a new cartridge has been properly installed, armed and ready to use.

• U.S. Coast Guard-approved inflatable life jackets are authorized for use by persons 16 years of age and older (check the label for USCG approval).

• Inflatable life jackets require regular maintenance and attention to the condition of the inflator.

• They must be on the boater or person(s) on board the vessel in order to satisfy the legal requirements outline in the life jacket carriage requirement.

Having an inflatable life jacket stored, or nearby does not satisfy the carriage requirement.

• They must have a full cylinder and all status indicators on the inflator must be green or the device is not serviceable and does not satisfy the legal requirements for the wearable life jacket carriage requirement. 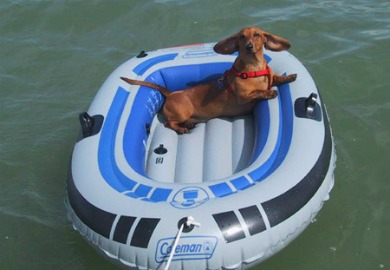 Utah regulations prohibit the use of inflatable lifejackets by:

• Anyone operating or riding on a PWC

• Anyone being towed behind a vessel

• Anyone under 13 years of age

• Anyone boating on rivers.

Pros and Cons of Inflatable PFDs:

Inflatable PFDs, while approved by the USCG, are not for everyone nor should they be used in every boating situation. 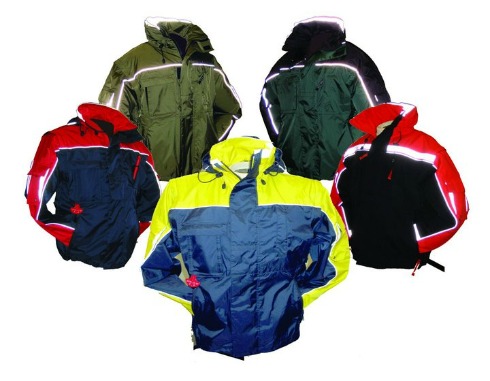 The United States Coast Guard has placed restrictions on their use as do many of the states. The following are some of the pros and cons:

• They are less bulky and more comfortable.

• They are light in weight.

• When inflated, they provide greater buoyancy.

• Thus doing a better job keeping a person’s head out of the water.

• They tend to be much cooler in hot weather or warm climates.

• For all of the above reasons, boaters are more inclined to wear them.

• They tend to be more expensive.

• As indicated above, there are legal restrictions to their usage.

• Type Vs must be worn at all times to meet USCG guidelines (Maybe this should be listed under the Pros).

• Inflatables are not recommended for non-swimmers and are not approved for children and people who weigh less than 90 pounds.

• They have a CO2 cartridge which inflates the life jacket.

• This cartridge must be properly installed and replaced with a new one after the vest has been inflated.

I am sure there are more pros and cons than I have cited, but in my list they are pretty well balanced.

The factors, which for me, tip the scales in favor of the inflatables are that they are less bulky, lighter, more comfortable and, for those reasons, I would be more inclined to always wear one.

While it may seem like a bother or hassle to wear a PFD, traditional or inflatable, National statistics suggest that nearly 80 % of the people who drowned in boating accidents would have survived had they been wearing a life jacket.

Boat operators should ask everyone on their boat to wear a PFD whenever on the water, including pets. PFDs can save lives, but only if they are worn!

Why bet against the odds? Wear a life jacket!

Return From PFDs To Lake-Powell-Country