A Complete Guide To…

Arches National Park, located off Highway 191, five miles North of Moab, Utah, With more than 2,000 arches has the greatest density of natural arches in the world.

National Park offers mute testimony to the forces of wind and water erosion.

The park is home to Delicate Arch, one of the most photographed arch in the park and the one displayed on Utah’s license plates.

• Individuals: $5 (Good for 7 Days)
Applies to motorcycles, bicycles and walk-ins (per person).

• Vehicles: $10 (Good for 7 days)
Includes all occupants of a vehicle.

• All federal lands passes are issued and accepted at Arches.

For a map of Arches National Park, Click Here.

Getting around the park﻿

In 2010, for the first time in the park’s history, visitation reached one million visitors during one year.

Unfortunately, the infrastructure at the park is not equipped to handle such numbers. 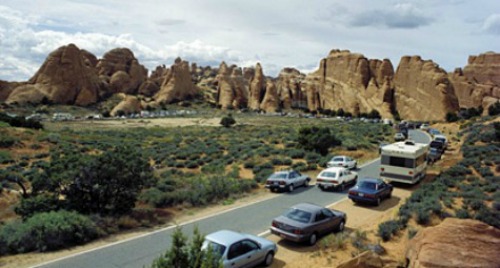 The roads are narrow and the parking is limited at all destinations, especially at such popular trailheads as Delicate Arch and Devils Garden which may fill for hours at a time, especially on weekends and holidays.

It is commonplace to find the parking lots full anytime between 10 a.m. and 4 p.m. from March through October.

And, even if you find a parking space, “…expect to see a lot of other visitors on the trail. It is not uncommon for hundreds of people to visit Delicate Arch at sunset.” 1

You can avoid some of the crowds by arriving at the park before 8 A.M., although even then you will encounter photographers who are out early to capture the sweet light. 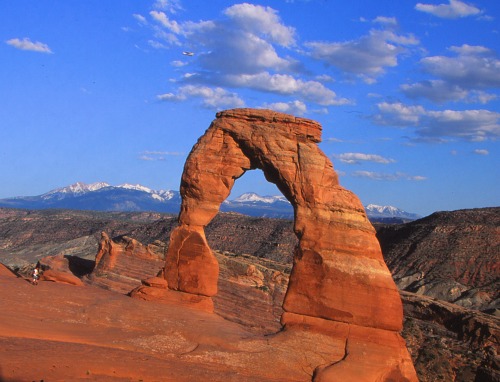 It is difficult to see, but just to the left of the clouds above the arch is a small white airplane.

What Other Visitors Have Said

Click below to see contributions from other visitors to this page...

Artist in the Park 2013 Schedule

To avoid the masses of adoring visitors to Arches National Park, the best time to visit is generally anytime between November and May.

According to Rebecca Latson, in a February 23, 2013 posting on her website,

“February is an awesome time to visit the park, if you can handle the cold temperatures. There are absolutely NO crowds – not even tour buses.

That means you can explore popular spots like Balanced Rock, the Windows section, and Delicate Arch without having to clone people out of your images.  At times, I was the only person there (Balanced Rock and Delicate Arch) and it was an incredible feeling. Plus, it might snow in February like it did for me when I was there.” 2

July through August are especially busy times of the year even though the temperatures are exceedingly high.

The following holiday and weekends are best avoided: 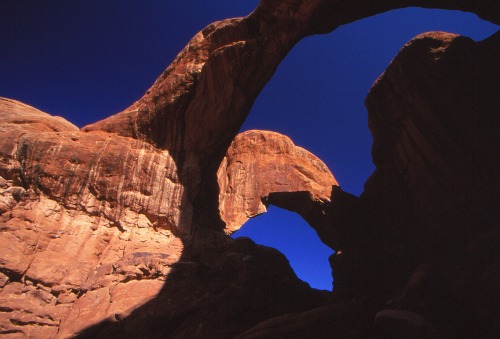 • Located eighteen miles from the park entrance Open year-round.
• 50 individual sites at $20 per night
• Sites will accommodate up to ten people.

There are no showers or RV dump/fill stations.
Some sites will accommodate RVs up to 30 feet in length.
Bring your own wood or charcoal for the grills.

• All sites may be reserved for nights between March 1st and October 31st.
• Reservations must be made no less than four days and no more than 180 days in advance.
• There is an additional $9 booking fee for reservations.

For more information about the Campground and Reservations, Click Here.

For the many visitors who are limited on time or who prefer to remain close to their vehicles, the 18-mile scenic drive through The Devil's Garden and the Windows Section of the park offers them an opportunity to see some of the outstanding features of the park.

Bicycles are permitted on all paved and unpaved roadways within the park but not on any of the trails.

Within the park, there are no bike lanes, and riders are required to ride single file with the flow of traffic.

Outside of the park, there are ample opportunities for biking. There are trails of every difficulty level, from dirt roads to technical single-track. 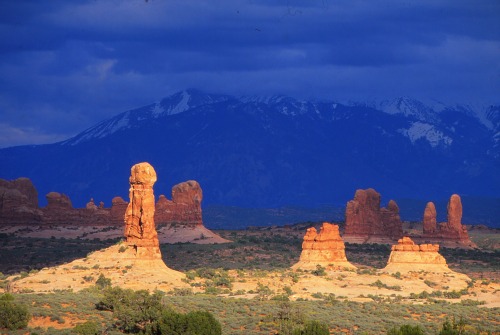 Hiking in Arches National Park is a great way to explore the park and see the arches from a different perspective.

There are hikes for everyone: easy, moderate and difficult.

These hikes range from 0.3 miles round trip to 1.6 miles and take from 15 to 60 minutes to complete.
They include the following trails: 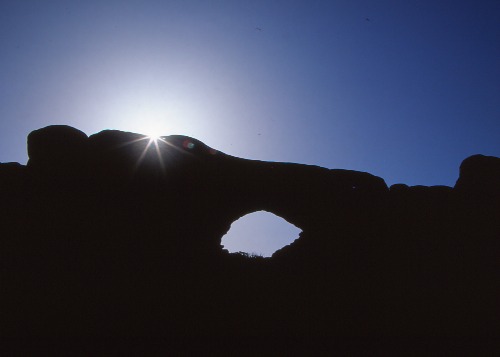 These hikes range from 2.0 miles round trip to 3.4 miles and take from 60 minutes to 3 hours to complete.

They include the following trails:

These hikes range from 3.0 miles round trip to 7.2 miles and take from 2 to 5 hours to complete.

In order to visit the Furnace without a ranger, one must obtain a permit at the visitor center (fee charged) and watch a minimum impact video.” 1

To help you plan your shooting schedule, the Arches National Park service has published a list of arches and the suggested best time for filming them.

Some of the most dramatic photographs I have ever seen were made when the weather was stormy.

Storm clouds billowing in the sky, jagged bolts of lightning streaking toward the ground, a double rainbow arcing through the heavens and who could ever forget the horror of a tornado racing across the landscape.

Almost 50 species of mammal are known to live in Arches National Park.

While one does not normally expect to find wildflowers growing in a desert environment like Arches National Park, they are actually quite bountiful.

Large plants are a natural part of the high desert ecosystem providing food, shelter and shade for animals and for the prevention of soil erosion.

Some of the more common trees and shrubs are:

For more information on all of the park’s animal and plant species, Click Here:

Pets must be on a leash at all times when outside a vehicle.
Pets may not be left unattended
• The exception is at a paid campsite at the Devils Garden Campground as long as they do not cause a disturbance.

The town of Moab had its early beginning in April of 1855 with the establishment of a trading fort called “Elk Mountain Mission,” but, after repeated attacks by Ute Indians, the fort was abandoned in September of the same year.

It would be another twenty-three years, 1878, before Moab would become a permanent settlement.

It has gone through several transitions, from an agricultural based economy, to potash and manganese mining, to becoming the “Uranium Capital of the World” in the 1950s.

If you are planning on staying a few days in Moab, or even a few hours, a good place to start would be with a visit to the website of the Moab Area Travel  Council.

Here you will find just about anything to do with Moab and the Moab area, from dining and lodging, to local attractions, even to weddings beneath a sandstone arch.

Like much of the southwest, Arches National Park was home to the ancestral Puebloan and later the Fremont people.

They were hunters and gatherers who settled in the area and raised maize, squash and beans and lived in pueblos similar to those found at Mesa Verde.

The only evidence they left behind of their existence here are rock art panels.

Both the Fremont and the ancestral Puebloans left the area about 700 years ago.

They were replaced by nomadic Ute and Paiutes.  This is evidenced by rock art panels which depicted men on horseback.  Horses were introduced to the natives by the Spanish.

Spanish explorers were in the area searching for travel routes from Santa Fe, NM to their missions in California.  The old Santa Fe Trail passed by what is today the park’s Visitor Center.

The earliest known date of a person of European ancestry visiting the park was June 9, 1844. This was an inscription left behind by Denis Julien, a French-American trapper.

In the 1850’s Mormon Church of Latter Day Saints tried to establish the Elk Mountain Mission in what is now Moab.  This Mission was abandoned due to conflicts with the Utes.

Somewhere around 1898, Civil War veteran John Wesley Wolfe, built a homestead, known as the Wolfe Ranch, across from what is today the Delicate Arch trailhead.

He and his family lived there for ten years or more before moving back to Ohio.

The cabin remains as an artifact to those early years. 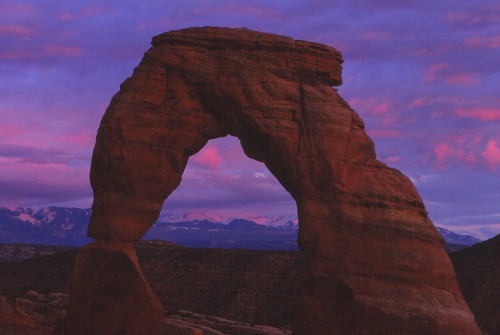 In 1923 Alexander Ringhoffer, a local prospector, wrote the Rio Grande
Western Railroad, in an effort to publicize the area and gain support
for creating a national park.

In 1971 Congress changed its status to a National Park. 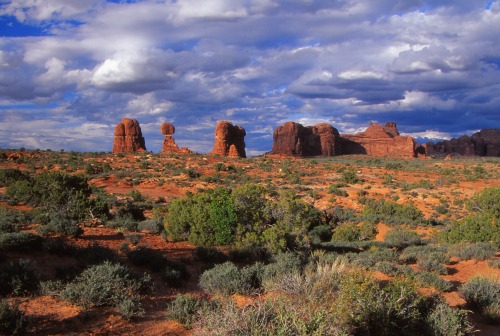 Journalist and environmental activist, Edward Abbey, worked as a seasonal ranger for the National Park Service at Arches National Monument in 1956 and 1957.

His first work of non-fiction, Desert Solitaire: A Season in the Wilderness, was based upon notes and sketches from those years.

He was best known, however, for The Monkey Wrench Gang which was used as a handbook for radical environmentalist groups.

“Abbey wanted his body transported in the bed of a pickup truck, and wished to be buried as soon as possible. He did not want to be embalmed or placed in a coffin.

Instead, he preferred to be placed inside of an old sleeping bag, and requested that his friends disregard all state laws concerning burial…. Abbey's body was buried in the Cabeza Prieta Desert in Pima County, Arizona.” 3

Return From Arches National Park To Nearby Attractions