“A Helluva Place To Lose A Cow”

In terms of size, 56.2 square miles, Bryce Canyon National Park is small in comparison to other National Parks.

However, in terms of unique and spectacular geologic formations, it is gargantuan.

It is the uniqueness of the rocks, formed when ice and rainwater wear away the weak limestone, which attracted visitors and resulted in it becoming a national park.

Bryce Canyon National Park is a series of 14 magnificent amphitheaters  each carved almost a quarter mile into the eastern face of the Paunsaugunt Plateau of southwestern Utah.

It is a dreamscape of fanciful formations like Thor’s Hammer, The Poodle, The Hunter, The Pope, Sinking Ship, The Sentinel, The Cockscomb and Chinese Wall. 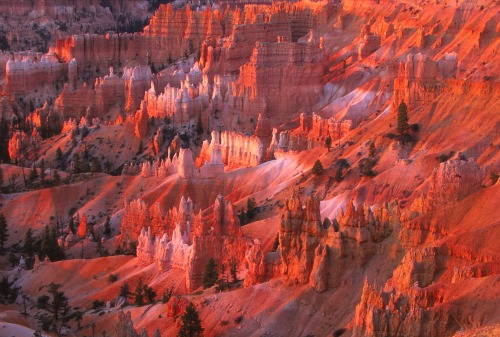 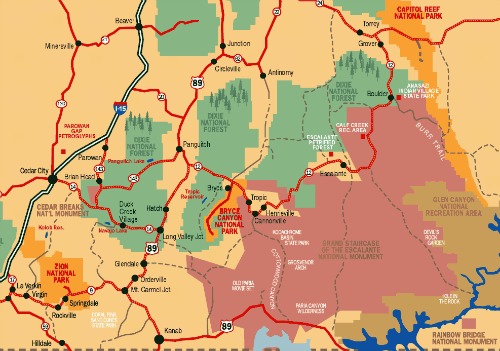 Located 4.5 miles south of the intersection of Hwy. 12 & Hwy. 63, near the town of Tropic in southwestern Utah.

Individuals 15 years old and younger are admitted free of charge. 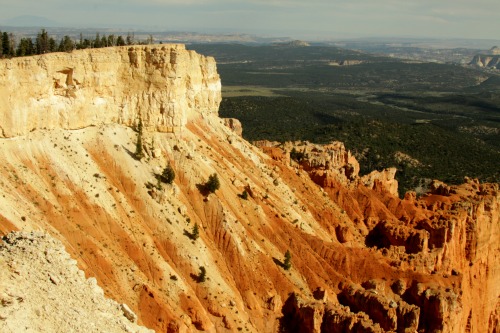 Visitors with a National Parks and Federal Recreational Lands Pass or a Volunteer Pass are admitted free.

Admission to Bryce Canyon National Park is for seven days. No refunds are given due to inclement weather.

The Visitor Center and Fee Booths are closed for:

Daylight Savings Time begins the second Sunday in March and ends the first Sunday in November.

Bryce Canyon is in the Mountain Time Zone

Like many busy National Parks, Bryce Canyon has a FREE mass transit system to minimize vehicle congestion and the

Although it is not mandatory that visitors use the shuttle, it is encouraged.

The $25 entrance fee entitles visitors to unlimited, free use of the Bryce Canyon Shuttle buses.

The buses run every 12-15 minutes and visitors may board or leave the buses at any designated stop.

The first bus of the day leaves at:

• 8 a.m. from the Shuttle Staging Area

The last bus leaves at:

All times are Mountain Daylight Time. 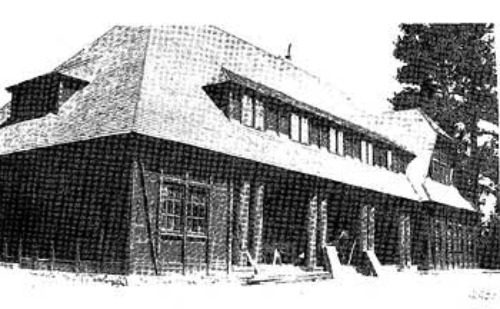 The Lodge at Bryce Canyon is the only lodging within the park.

It was designed in the 1920s by Union Pacific Railroad architect Gilbert Stanley Underwood who also designed the lodges at the North Rim of the Grand Canyon, Cedar Breaks and Zion.

These lodges were built within the parks in hopes of attracting rail passengers to visit these various parks and to attract more people to ride the trains.

Visitors who arrived by train at Cedar City were driven by open-air buses to Bryce Canyon.

The lodge is operated by Forever Resorts and offers:

• 114 guest rooms, which include
• four suites on the lodge's second level
• motel-style rooms in separate buildings (with balconies or porches)
• historic lodge pole-pine cabins, some with cathedral ceilings and gas fireplaces. Western cabins
• Dining Room in the main lodge

All accommodations are non-smoking and feature phones and radio alarm clocks.

There are no televisions.

The search results show Bryce Canyon Lodge as well as others in the area around Tropic, Utah.

There are two campgrounds within the park boundaries, North Campground and Sunset Campground.

Located across from the Visitor center at the north end of the park.

• 99 sites in 4 loops; A, B, C, D.
• Loops A & B are for RV campers
• Loops C & D are for tent campers
• $15 per site/per night on a first-come, first-served basis *
• No sewer, water or electrical hookups
• Potable water spigots are located throughout the campground

*13 RV sites may be reserved in Loop A for the following dates only:

Reservations for these sites can be made from 6 months to 2 days in advance (minimum advance reservation is two days. 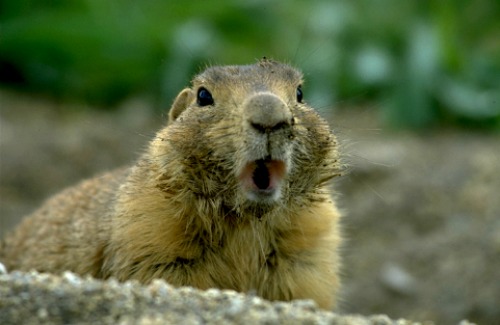 • 100 sites in 3 loops; A, B, & C
• Loop A is for RV campers
•  Loops B & C are for tent campers
•  Two wheelchair-accessible sites are located in Loop A
• $15 per site/per night on a first-come, first-served basis*
• No sewer, water or electrical hookups
• Restroom is provided at each loop
• Potable water spigots are scattered throughout the campground

*20 Tent Sites may be reserved in Loop B for the following dates only:

The Group site is for a minimum of 7, maximum of 30 individuals. Cost per night is based upon the size of the group.

Hiking is a fun and healthy way to see and experience Bryce Canyon national Park.
There are hiking trails for every level of physical fitness and hiking ability, from easy hikes like the .8 mile roundtrip Mossy

For those with the time and the inclination there are

For more information about these hikes, go to www.nps.gov.

From scant artifacts found in the canyons south of the park, it is believed that the Basket Makers were the earliest known inhabitants of the region.

Shortly after A.D. 1000, archaeologists believe that either the ancestral Puebloans or Indians of the Desert Culture may have followed the Basket Makers into the region.

By A.D. 1200, they had left the area and were replaced by the Paiutes, a semi-nomadic- people.

There is also evidence that Navajos from south of the Colorado River visited the area but never stayed for any lengthy period of time.

The Church of Jesus Christ of Latter-day Saints was a strong presence in southern Utah in the 1850s.

Mormon scouts first visited the Sevier River near Panguitch in 1852 which probably afforded them a view of the Sunset Cliffs.

However, it was not until 1874 that Mormon settlers established farms in the upper Paria Valley, near the junction of the Paria River and Henrieville Creek.

Ebenezer Bryce and his family came to the area in 1875 or 1876 and with help from his neighbors built a 7 mile long irrigation ditch from the Paria Creek, thereby making it possible to grow crops and raise cattle.

The story is told that some of his cattle had wandered into the nearby canyons and that after spending considerable time looking for them, he remarked that, “It’s one hell of a place to lose a cow.”

In addition to the irrigation ditch, Ebenezer Bryce built a road to an amphitheater where he and others harvested timber for building and firewood.

Although Ebenezer Bryce gave his name to the canyon, perhaps no one is more deserving of recognition for popularizing it

The Styretts homesteaded a quarter section of land 3-1/2 miles north of what is now Sunset Point.

They invited friends to come out to see their wondrous canyon which was so well received that they started buying up more of the land around them. 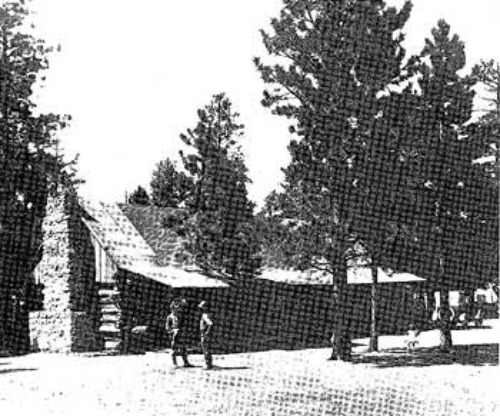 By 1920, as more and more visitors from all over the country came to see the canyon, the Styretts decided to build a permanent lodge, which they named Tourist's Rest.

The lodge, which measured 30 feet by 71 feet, was made of sawed logs and had a dining room with a fireplace, a kitchen, a storeroom, and several adjoining bedrooms.

In addition to the lodge, they built several cabins nearby and a 35 feet by 76 feet open air dance platform.

The Styretts operated the lodge until it was purchased in 1923 by a subsidiary of the Union Pacific System.

Through the efforts of individuals like the Styretts and commercial enterprises such as the Union Pacific System there was getting to be a lot of people interested in Bryce Canyon; and not all of these were in a good way.

Fortunately there were those who felt strongly that Bryce Canyon was a national treasure and should be protected from further commercialism by making it a National Park.

However, before this could be done, there were several issues which first had to be resolved and a resolution would take time.

The quickest option was to first make Bryce a National Monument, which could be done by presidential proclamation, then tackle the other issues.

Once the Monument was under federal protection, these issues could then be dealt with in a more leisurely manner.

Within a year after President Harding issued his Executive Order creating the monument, Congress initiated steps to alter the status of Bryce Canyon from a national monument to a national park.

However, before it could become a National Park, all the land within the boundaries of the park had to be the property of the United States.

Unfortunately, both the State of Utah and the Union Pacific owned some of this land and would have to convey ownership to the United States.

Understandably they were reluctant to do this without certain concessions and remuneration and it was not something that could be immediately resolved.

In fact, it took until September 15, 1927 before an agreement was reached between the United States, the State of Utah, and the Union Pacific Railroad which fulfilled the requirements of the 1924 legislation.

On December 6, 1927, Senator Smoot, from Utah, introduced a bill to change the name to Bryce Canyon National Park.

From the highest part of the park, Rainbow Point, to the lowest point at Yellow Creek, the elevation at the park varies almost 2500 feet.

Consequently, Bryce Canyon enjoys a high biodiversity with over 100 species of birds, from the tiny Black-chinned Hummingbird to the California Condor; dozens of mammals, from the ubiquitous Golden-mantled Ground Squirrel to the rare and elusive Mountain Lion; and more than a thousand plant species, from the dainty Wyoming Paintbrush to the ancient Great Basin Bristlecone Pine. 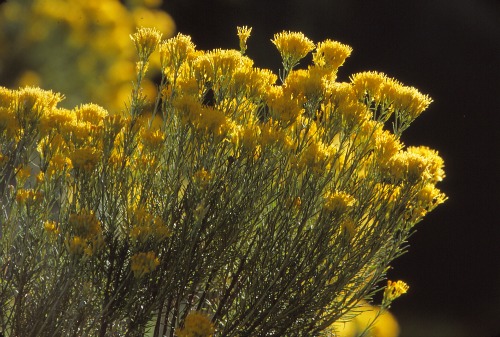 Return From Bryce Canyon National Park to Nearby Attractions