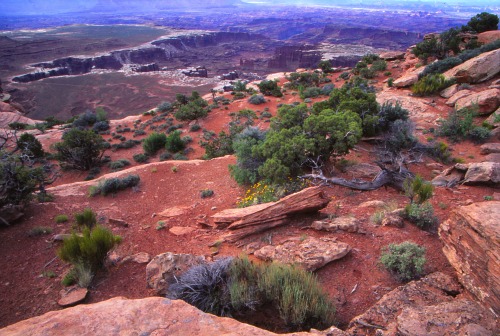 The Green and Colorado Rivers divide Canyonlands National Park into three distinct districts: the Island in the Sky, the Needles and the Maze; each named for their unique features.

It is a land of contrast, from towering plateaus, to needle-like sandstone spires to deeply grooved gooseneck canyons.

It is a place for the young and the not-so-young but still young at heart.

Upheaval Dome - Island in the Sky 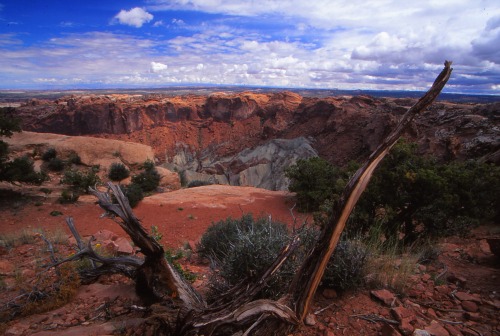 The three districts have their own visitor center and operating hours that differ depending on the season.

The Hans Flat Ranger Station is open daily from 8 a.m. to 4:30 p.m. and will close Thanksgiving Day, Christmas Day, and New Year's Day.

It is closed Thanksgiving Day and for an extended period during the winter. 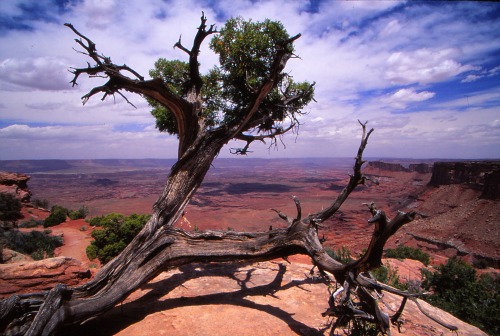 The entrance fees are good for 7 days.

Local Passport: $25 (Good for one year)
Good for entrance to Arches, Canyonlands, Hovenweep and Natural Bridges.

All federal lands passes are issued and accepted at Canyonlands.

The only reservations available are for:
•    Backcountry permits
•    River permits
•    Group campsites in the Needles 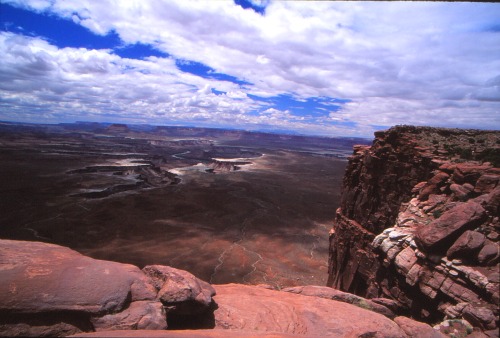 Permits are required for all overnight trips in the backcountry.

It is important you read and adhere to the regulations which are printed
on all backcountry permits issued by Canyonlands.

To see a copy of these regulations, Click Here.

Important Warning from the NPS!

The desert can be deadly for pets. Car temperatures rise quickly in the sun, even on cool days. Your pet can easily die of heat exhaustion.

If you are leaving a pet in a car, crack the windows as much as possible and leave water to drink.

We recommend you not leave pets in the car at all when temperatures are above 68 degrees, even with the windows cracked.

Upheaval Dome - Island in the Sky 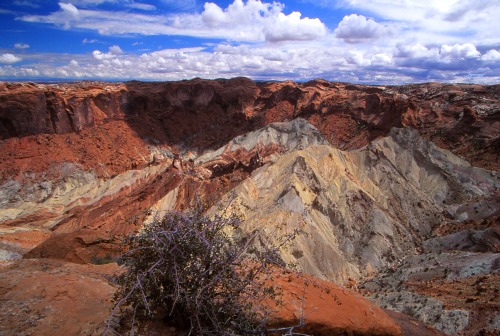 For the active person, Canyonlands National Park offers a multitude of outdoor activities such as:

There are hundreds of miles of four-wheel-drive roads in Canyonlands ranging in difficulty from intermediate to extremely challenging.

However, for the regular two-wheel-drive family sedan, the paved Island in the Sky scenic drive is the one most recommended.

Island in the Sky sits 1,000 feet above the surrounding country and the drive offers many pullouts with expansive, panoramic views. 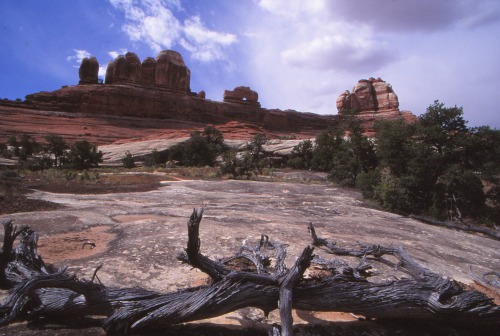 If you like mountain bike camping and a good challenge, you will love the White Rim Road in the Island in the Sky district.

This is a 100 mile dirt road which loops around and below the mesa top offering broad views of the surrounding country.

Backcountry permits are required, and during the spring and fall seasons the demand for permits often exceeds the number of permits available.

There are 10 campsites spaced along the road and bicyclists must stay in one of the designated campsites.

The park service recommends you have a four-wheel-drive support vehicle to carry water and equipment.

This can be a challenging ride, especially during inclement weather, so come prepared. 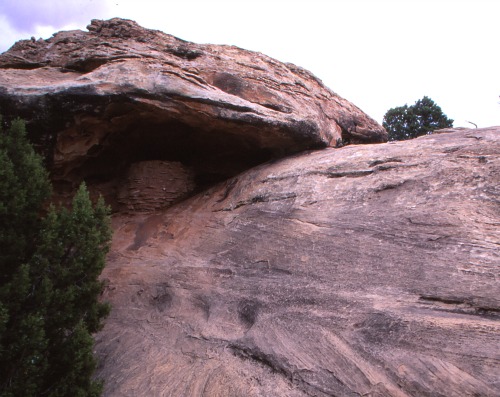 Ranger-led-programs are one of the greatest ways to learn about Canyonlands National Park.

These knowledgeable rangers offer programs on a variety of subjects from exotic plants and astronomy to cowboys and explorers; most programs last about one hour.

Snow-capped Mountains As Seen From Island in the Sky 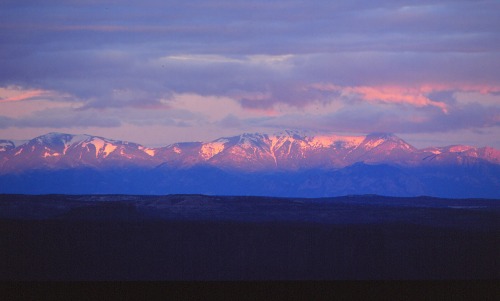 Canyonlands National Park is located within the Colorado Plateau, a "high desert" region that experiences wide temperature fluctuations, sometimes over 40 degrees in a single day.

Spring (April through May) and fall (mid-September through October) are the most popular seasons when daytime highs average 60 to 80 F and lows average 30 to 50 F.

Snowfall is uncommon, except in the nearby mountains.  However, even small amounts of snow or ice can make local trails and roads impassable. 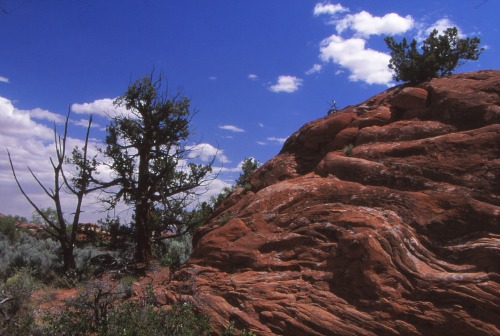 To many people unfamiliar with the desert southwest, the only living things found here are rattlesnakes, scorpions and cactus.

Leading to that assumption is the fact that during the heat of the day, the desert landscape appears to be devoid of wildlife.

But, as we all know, looks can be deceiving.

Most of the creatures we find here are either nocturnal, active only at night, or crepuscular, most active during the early morning and late afternoon hours.

The best times, then, to see wildlife are during the evening hours or those early in the morning or late in the afternoon. 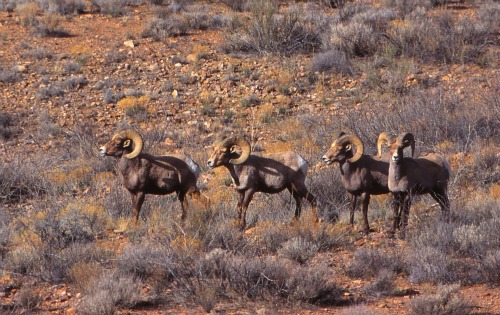 Most of the wildlife we see at Canyonlands National Park are birds.

273 species have been seen in the park.  This number includes seasonal and year-round residents as well as migrants.

The only venomous snake found in Canyonlands National Park is the Midget-faded rattlesnake, which is primarily a nocturnal snake, lives in burrows and rock crevices and is actually listed as uncommon.

Plants are critical components to all ecosystems, and Canyonlands National Park is no exception.

Wildflowers are dependent upon several environmental factors, such as rainfall, temperature and season. 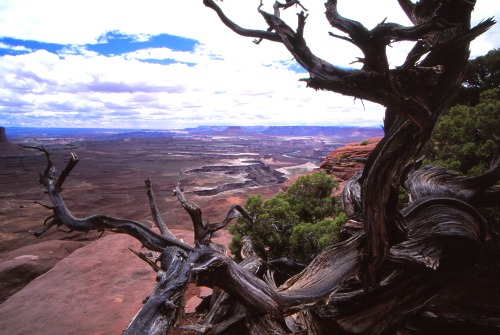 Archaeologists believe that the first human inhabitants of Canyonlands National Park arrived here over 10,000 years ago.

These were the Paleo-hunters who probably did not live there permanently but only traveled through the country in search of big game.

They were followed by the Archaic hunter-gatherers who are believed to be responsible for the beautiful pictographs and petroglyphs found in the Great Gallery in Horseshoe Canyon.

Then about 2,000 years ago, the ancestral Puebloans moved into the area and began farming maize, squash and beans to supplement their animal diet.

They lived in multi-room structures built of native stone such as those found in the Tower Ruins in the Needles.

They shared this area with the Fremont people who were also farmers but who lived in pit houses dug into the ground and covered with a brush roof, or in natural rock shelters.

The first documented account of European descent was Julien Denis, a fur trapper who inscribed his name, the date and a pictured of a boat on a sandstone rock along the Green River.

The first official exploration of the area was in 1869 by John Wesley Powell.

Mining prospectors roamed the area in the late 1800s and large ranching operations brought horses and cattle into the canyonlands.

In the 1950s, mining prospectors covered the area searching for Uranium.

Although large amounts of Uranium were taken from the area, they met with little success within what is now Canynlands National Park.

However, the roads they created in their search for Uranium opened the area to visitors who came to marvel at nature’s marvels. 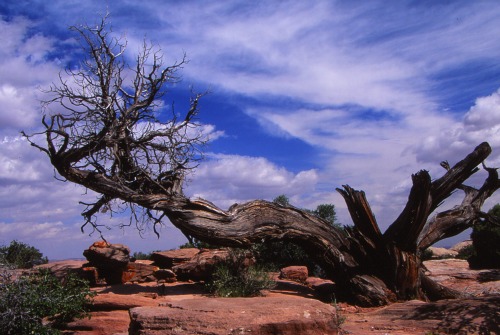 The man behind the park, Bates Wilson, was superintendent of nearby Arches National Park from 1949 to 1964.

After visiting the area in 1951 he became a strong advocate of making it a National Park.

He began taking government officials on jeep tours into the canyon lands.

In June of 1961, Utah Democratic Senator Frank Moss, Secretary of the Interior Stewart Udall and members of his family made one of those trips.

When Udall returned to Washington, he began lobbying for Canyonlands National Park, and in 1962, Senator Moss introduced the Canyonlands park bill.

Also that year, the U.S. Department of the Interior published a paper entitled A Proposed Canyonlands National Park.

Return From Canyonlands National Park To Nearby Attractions