Highway 24 bisects the Park near its northern boundary and runs east to west paralleling the Fremont River, named after explorer John C. Fremont who crossed its headwaters in 1853. 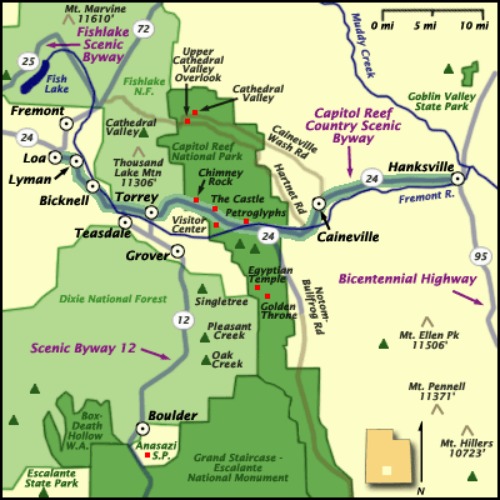 Capitol Reef National Park is located in south-central Utah, off Hwy 24, half way between the towns of Torrey and Hanksville.

Entrance Fees, good for 7 days, are charged for traveling the park's Scenic Drive beyond the Fruita Campground.

Individuals: $3.00 – This fee applies to pedestrians and bicycles (per person).

Vehicles: $5.00 – This fee applies to private vehicles and motorcycles. 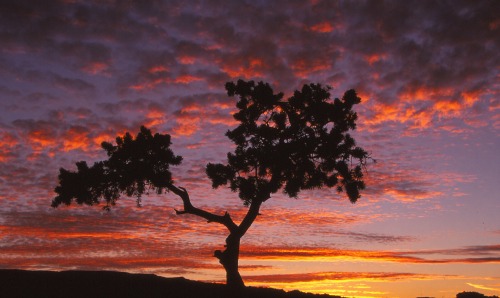 The Park and Campground is open all year round.

The visitor center will be closed for the following Federal Holidays during the year 2013:

The chart below, downloaded from the NPS website, is based on temperature and precipitation records from 1948 through 1986.

While it is somewhat old, it may give you an idea of what can be expected from the weather:

The visitor center is accessible to wheelchair users and provides a ramped entrance, reserved parking, and accessible restrooms.
The 18-minute orientation movie is accessible and closed captioned for those with hearing impairments.

The petroglyphs along Utah Highway 24 are accessible by boardwalk.

Programs held at the Fruita Campground Amphitheater are accessible by a paved, lighted path from reserved parking spaces in the parking lot.

The Fruita Campground is located south of the Visitor Center in the Fruita Historic District.

Sites at the Fruita Campground are $10 per night. Senior and Access pass holders receive a 50% discount on their campsite. 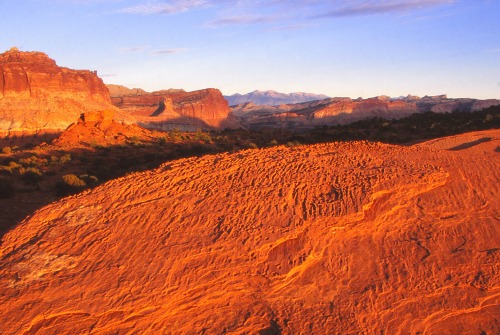 Pictographs and Petroglyphs - Very impressive petroglyph figures can be seen along a sheer cliff that parallels Hwy 24 just east of the Visitor Center in Capitol Reef.

The figures cover several rock panels and the diversity of images is astonishing. A road sign identifies the area, which includes a parking turnout.
Boardwalks and viewing platforms have been established to make it easy for visitors to see the figures.

Scenic Drives – With the exception of the 8.2 mile scenic drive which starts at the Visitor Center, the drives are all on dirt roads requiring a high-clearance/4WD vehicle.  For more information, Click Here. 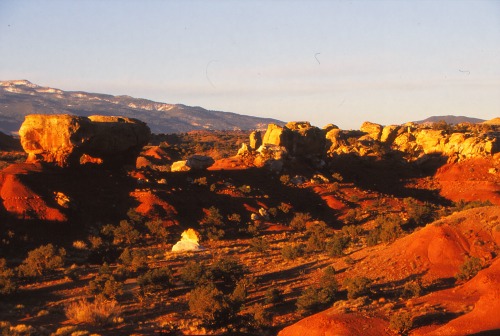 Free Ranger Programs offered from May to September

Pets must be restrained at all times on a leash 6 feet (1.8 m) or less in length.

They may not be allowed to run free.

They may not be left unattended in vehicles, at trail head, campsites or any other location.

You are responsible for cleaning up after your dog and disposing waste in a dumpster.

One of the nice things about visiting a National Park is being able to watch animals in their natural environment.

Some of the mammals found in Capitol Reef National Park may be abundant and seen in large numbers in suitable habitat, while others are rare and seldom observed.

More than 230 bird species have been documented in Capitol Reef National Park. Some species are seasonal residents, others pass through during migration, and a few make this their home year-round.

Many people, myself included, have an aversion to reptiles.  They are, however, a necessary part of our ecosystem.

Some of the more common reptiles found in Capitol Reef National Park are:

“The varied topography, geology, elevations, and precipitation patterns along the Waterpocket Fold have resulted in a diversity of microhabitats and niches for plant species to inhabit.” 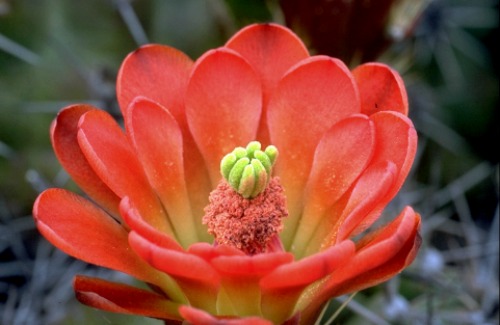 Some of the earliest people to inhabit the area in and around Capitol Reef were the Fremont people named by archaeologists for the Fremont River which flowed east to west through the area.

They were primarily hunters and gatherers who supplemented their diets with maize, beans and squash grown in the bottomlands along the Fremont.

Unlike the Ancestral Puebloans who lived in rock buildings constructed above ground, the Fremont people lived in brush and log huts, called wikiups, pit houses dug into the ground and covered with a brush roof, or in natural rock shelters.

They built stone granaries in caves and alcoves to store maize and other crops.

Unique to the Fremont people was a leather moccasin made from the hide of large animals, such as deer, which incorporated the dew-claw as part of the sole.

Also, unique to the Fremont was a type of basketry, called one-rod-and-bundle, composed of willow, yucca, milkweed and other native fibers.

The area in and around Capitol Reef National Park abounds with rock art left by the Fremont people.

There are both pictographs (painted) and petroglyphs (pecked or carved) which depict people, animals and other shapes and forms.

The Fremont people left the area near the end of the thirteenth century probably as a result of an extended drought, overuse of local resources and the encroachment of the Shoshonean culture.

Although Pectol has been called the father of Capitol Reef National Park, the two men worked together to promote the scenic value of what they then called Wayne Wonderland, a reference to its location in Wayne County, Utah.

It was largely through their efforts that the people of Utah were made aware of this beautiful and stunning wonderland.

Together they worked to organize local booster clubs to promote Wayne Wonderland and make it Utah’s first State Park.

In July of 1925 Joseph Hickman drowned at Fish Lake, and, after his death, the movement lost some of its momentum.

However, Pectol continued in his efforts to promote Wayne Wonderland, and in 1933 was elected president of the Associated Civics Club of Southern Utah.

That same year he was elected to the Utah State Legislature and one of his first actions was to contact President Franklin D. Roosevelt asking him for the creation of "Wayne Wonderland National Monument.

This resulted in a Federal feasibility study and boundary assessment under the supervision of Zion Superintendent Preston Patraw with Ephraim P. Pectol often acting as a guide. 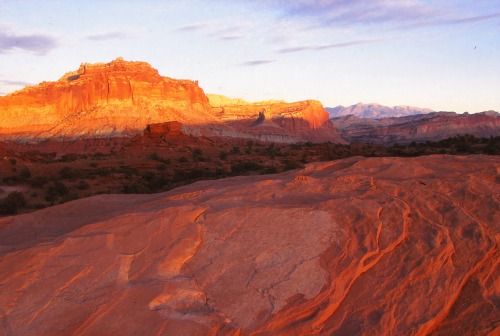 During this study, it was decided that a name change was in order, because “….neither "Wayne" nor "Wonderland" were "sufficiently distinctive" to describe the proposed area.

Since "Waterpocket Fold National Monument" was too long, Patraw suggested "Capitol Reef," the local name for the prominent domes and cliffs that would be at the center of the new monument.”

Its dimensions were about 18 miles from the northwest tip to the southeast corner. It was roughly two to five miles wide.”

In 1942, Wallace Stegner, noted author and wilderness advocate, described the country as “…spectacular and almost inaccessible….The terrain is so broken and eroded that even yet parts of the monument have not been explored.”

Return From Capitol Reef National Park To Nearby Attractions