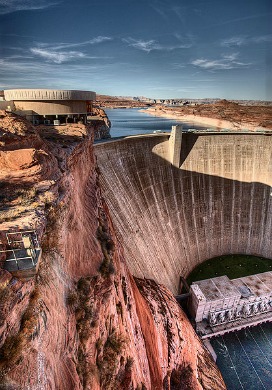 The Carl Hayden Visitor Center at Glen Canyon Dam is located on the west end of the dam, approximately 110 feet above its crest.

This beautiful, modernistic building whose circular, glass-enclosed east end juts out over the dam, provides a sweeping panoramic view of the dam and Lake Powell behind it.

Completed in 1963, the Visitor Center was built to acquaint and inform the many visitors who flocked to Lake Powell.

It now accomodates over a million visitors a year who come here from all over the world.

And, in this day and age of high energy costs and government waste, the Carl Hayden Visitor Center is actually a great example of energy efficiency as a result of retrofits made in 1994 and 1995.

When visiting Lake Powell, this should be at the top of your list of things to do. If you are limited on time, at least take the self-guided tour.

There are wonderful exhibits, photographs, dioramas and a beautiful relief map of the dam, Lake Powell and the surrounding area.

As you view these photographs and exhibits, it is like a taking a time capsule back to the past.

You are witness to the building of an engineering marvel, from the initial blast on October 15, 1956 to the last bucket of cement poured in 1963. You are there and you have a seat by the window.

Tours are approximately 45 minutes long. Each tour is limited to 20 persons (including infants and children.) Tour reservations are on a first come, first served basis; reservations may be made up to 24 hours in advance and must be reserved and paid for in person at the Carl Hayden Visitor Center.

If you have the time, and I strongly urge you to make the time, take the guided tour. You will be glad you did. The guides are friendly, very knowledgeable and welcome your questions.

The 45-60 minute tour first takes you down an elevator 110 feet to the crest of the dam where you can look over the edge and see the Colorado River more than 500 feet below. ﻿

Then, on to a second elevator which, in a little over a minute, will take you down another 528 feet.

After a short walk, you will be able to look over the edge and see below you an unusual sight: 86,000 square feet of grass that lies between the dam and the power plant.

The grass provides a cooling effect, much the same as an evaporative cooler, which aids in reducing temperatures inside the powerhouse. 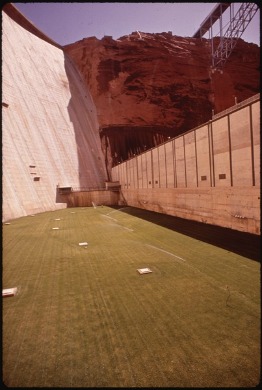 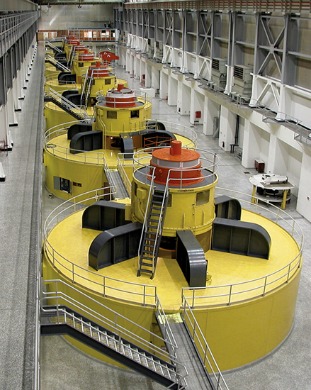 And, for the piece de resistance, you will have a spectacular close up of the eight hydroelectric generators which generate an average of 451 megawatts of electricity and have a maximum capacity of 1320 megawatts.

If you think you are going to take the tour, I would suggest making a reservation as soon as you get to the Carl Hayden Visitor Center.

The tours are limited to 20 people and during the peak seasons can fill up quickly.

By registering when you first get there, you then have time to look around, visit the Gift Shop/Book Store, visit the restroom or return to your car if you need to.

As you would expect In these days of post 9/11, , the dam is a tightly secured area and you are not allowed to bring in purses, bags, knives, fingernail clippers, food nor weapons of any kind. You will have to pass through a metal detector, so be forewarned. There are no exceptions.

Location: Highway 89 on west side of Glen Canyon Dam

Don’t neglect the outside of the building as there are a couple of memorials of interest:

• A Fountain Memorial dedicated to the 8 Bureau of Reclamation employees who died October 8, 1997 in a plane crash near Montrose, Colorado.

• A Bronze Plaque dedicated to the 18 men who were killed working on the Glen Canyon Dam. ﻿

He was a staunch advocate of water rights for Arizona. In fact, his record of defending Arizona's interests in the water rights dispute with California, probably more than anything else, helped him in his bid for election to the United States Senate in 1926.

In addition to the having the Visitor’s Center at Glen Canyon Dam named after him in 1969, his name has been given to:

However, the dam was built and the Visitor Center was built, but yet, over 50 years later, the controversy still runs rampant.

To learn more about this controversy,  please Click Here.
﻿

For the Carl Hayden Visitor Center: