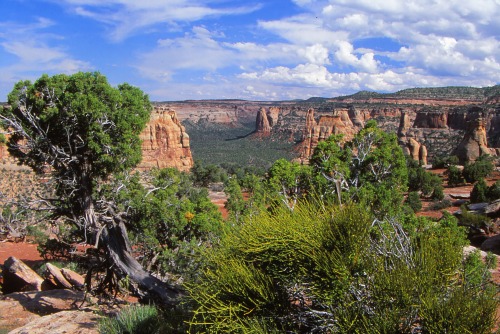 The Colorado National Monument is part of the northeastern section of the Colorado Plateau located between the towns of Fruita and Grand Junction.

It is a grand landscape, a vast ever changing landscape, formed over billions of years.

Lisa Schoch-Roberts, in A CLASSIC WESTERN QUARREL: A History of the Road Controversy at Colorado National Monument, describes the landscape as “…one of constant change….change is perceived each day when the sunrise and sunset turn the sandstone a brilliant orange.

The canyon walls are often dramatically spattered with desert varnish, an iron and manganese oxide that darkens the sandstone as if it had been rubbed with giant pieces of charcoal.

Even the monoliths, seemingly sturdy and one-dimensional, change shape depending on the angle from which they are viewed.”

The visitor center is open every day, except Christmas, December 25th.

The clearance above the lanes of traffic ranges from a low point of 11'5" two feet near the edge of the curb to a maximum of 16'1" above the centerline of the road.

The clearance above the lanes of traffic ranges from a low point of 11'5" two feet near the edge of the curb to a maximum of 16'1" above the centerline of the road.

The lower tunnel has a length of 236 feet

The Upper west tunnel is 182 feet.

Please keep your vehicle lights and/or bicycle lights on while traveling through the tunnels. 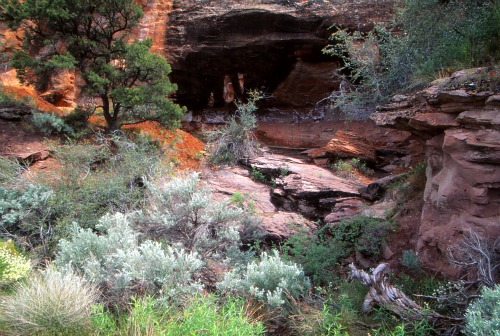 “A semi-arid climate dominates the Colorado National Monument and the Grand Valley below.

Rain is scarce, except for summer cloudbursts whose intensity has been known to wash out entire sections of the park's road and create temporary waterfalls that tumble from the canyon rims.

Average yearly rainfall measures around 6 to 10 inches. The winters are mild, with an average temperature of 40 degrees, and moderate snowfall.”

Temperatures during the summer are highly variable with summer highs ranging into the low 100s.

“Canyon Country can be deadly for pets. Car temperatures rise quickly in the sun, even on cool days, your pet can easily die of heat exhaustion.

If you are leaving a pet in the car, crack the windows as much as possible and leave water to drink.

We recommend you not leave pets in the car at all when temperatures are above 68 degrees, even with the windows cracked.”

• Sites are suitable for tents and recreational vehicles, with some pull-through sites

• Each site includes a picnic table, charcoal-only grill, and a parking area

• Wood fires are not permitted anywhere in the monument

• No electric hookups or showers

• Restrooms with flush toilets and water available during the summer

Pets are allowed at campsites, but must be leashed, well behaved, and attended at all times.

You are responsible for removing pet waste and placing it in garbage receptacles.

For an excellent hiking brochure, complete with map, Click Here.

Also, see the park service page on Short Hiking Trails which describes seven easy hikes, the longest of which are 1.5 miles round trip.

Those of you who would like to venture into the backcountry should also see Backcountry Hiking Trails for a description of seven different hikes. 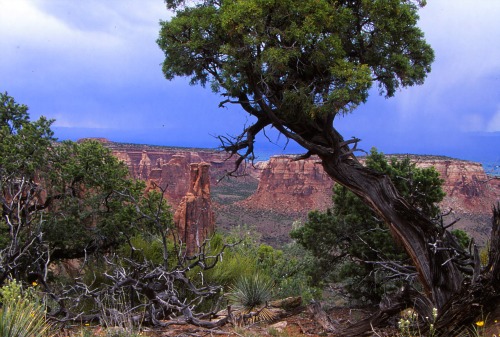 Although off-road mountain biking is not permitted in the monument, biking offers an excellent way to get your exercise and, at the same time, see the monument.

If you are thinking of riding the Rim Rock Drive, beware of the special requirement for traversing the tunnels:

“Bicycles or riders must be equipped with lights visible from the front and rear for safe passage through the tunnels.

For additional information on biking within the Monument, Click Here.

Although several people were involved in the establishment of Colorado National Monument, one of the most improbable and most colorful promoters of the monument was John Otto.

Otto came to the area in 1906 to work on the construction of a wooden pipeline designed to bring water up from Pinyon Mesa to the town of Fruita.

When the pipeline was completed in 1907, Otto moved into nearby Monument Canyon and readily admitted to people “…I'm up in the Monument Park. I live in a tent and pay no rent."

The promotion of Monument Park became Otto’s obsession, his whole purpose in life. 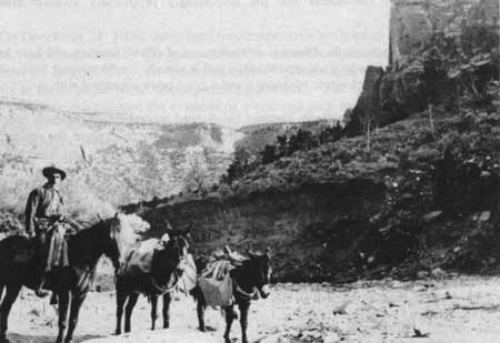 “Those who knew him remember him as a "virtual pest," who stopped people on the streets to discuss the Monument and annoyed the editors of the Daily Sentinel with endless letters regarding the park proposition, as well as other local and national events.”

It wasn’t long before Otto’s eccentric behavior led people to think he was crazy, and a hearing was held in Grand Junction to determine his mental health.

According to the Daily Sentinel, which covered his hearing, they found that although he “…was given his freedom, he was not strong mentally."

Not to be deterred by what people thought of him, Otto began building trails and inviting members of the Grand Junction Chamber of Commerce to come view the grandeur of the canyon.

“The members of the Chamber were dutifully impressed and, while Otto provided the inspiration and the physical labor to develop the park, the chamber of commerce used its credibility to garner the community support and political assistance necessary for withdrawal of the land.” 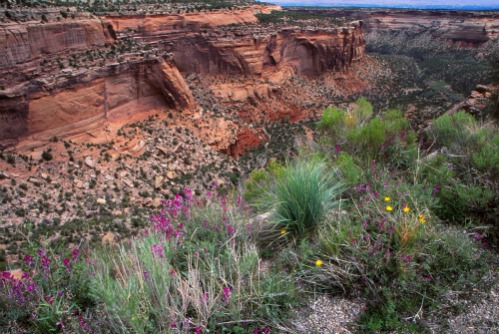 One of the men who offered “political assistance” was Edward T. Taylor, Congressman from Colorado, (D) 1909-1941.

“Taylor is best known for sponsoring the Taylor Grazing Act, enacted in 1934, which regulates grazing on federal lands. He also was responsible for the legislation in 1921 that changed the name of the Grand River to the Colorado River.”

Taylor’s involvement in the establishment of the Colorado National Monument was important as well.

In February, 1911, Taylor forwarded a petition signed by 300 citizens of Grand Junction and the surrounding areas to President William H. Taft.

The petition called for “establishment of the Monument Park in Mesa County."

In February, 1911, Taylor wrote to President William Howard Taft, enclosing a petition for the "establishment of the Monument Park in Mesa County" signed by 300 citizens of Grand Junction and the surrounding areas.

“On May 23, 1911, Secretary of the Interior Walter L. Fisher, a man "devoted to park preservation," submitted a proclamation "creating the Colorado National Monument" to President William H. Taft.”

“On May 24, 1911, William Howard Taft signed the proclamation setting aside approximately 13,883.6 acres for the purpose of establishing the Colorado National Monument.”

At the suggestion of Congressman Taylor, John Otto was appointed as the park’s first Custodian at a salary of one dollar a month.

This made Otto an official federal employee and authorized him to run the park; a job Otto took seriously until February 23, 1927, when the Park Service officially terminated him. 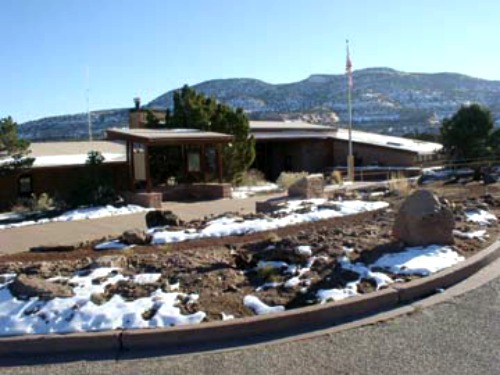 The structures follow the precedent set by earlier park structures by using native sandstone laid in a random ashlar pattern."

In a departure from the rustic-style buildings constructed by the Civilian Conservation Corps (CCC) for the Park Service in the 1930s, Mission 66 designers embraced a contemporary structural form for the new centers.

Although the Visitor Center Complex is less than 50 years old, it is eligible to the National Register under Criterion Consideration G as an exceptional example of NPS Mission 66 planning and Park Service Modern Architecture in Colorado. 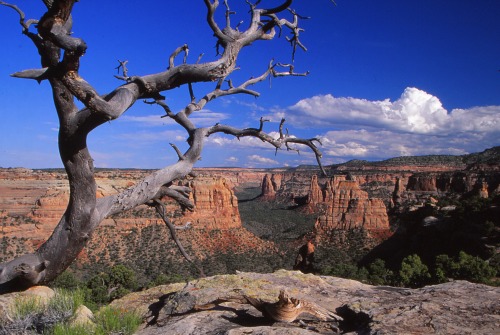 Modern Architecture in the National Parks

THE EMERGENCE OF THE MISSION 66 VISITOR CENTERS

Return From Colorado National Monument To Nearby Places