A Vital Link Between Two States 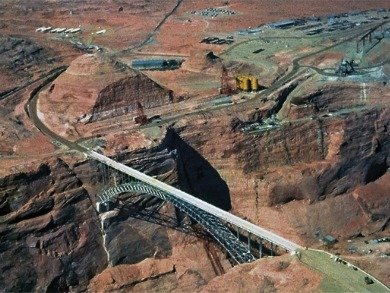 Glen Canyon Bridge, like many things in life, was born out of necessity, and it all started through an Act of Congress.

On April 11, 1956 the U.S. Congress authorized the construction of Glen Canyon Dam to be located on the Colorado River approximately 17 miles north of Lee’s Ferry, Arizona and 12 miles south of the Arizona-Utah border. 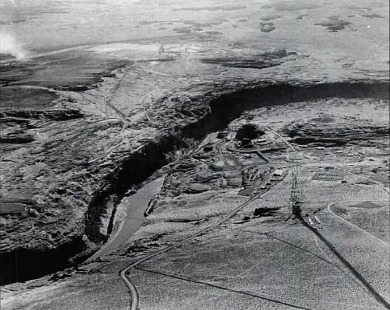 In 1956 this location was pretty much in the middle of nowhere. There was no railroad here and the nearest towns of any size were Flagstaff, Arizona, 130 miles to the south, and Kanab, Utah, 73 miles to the north.

To further complicate things, there were no roads from the dam site to either of these towns and, there was no way across the deep chasm formed by the Colorado River.

So how can you build a dam where there are no roads and you have no way of getting from one side of the river to the next? You build roads and a bridge. Thus, Glen Canyon Bridge was born out of necessity.

For these reasons, Reclamation decided to build a separate bridge. But, then the question arose as to what kind of bridge should be built:

Wisely, they decided on the second option.﻿

The Glen Canyon Bridge was designed by Robert Sailer, who was the Head of the Bridge Section in Denver for the US Bureau of Reclamation. 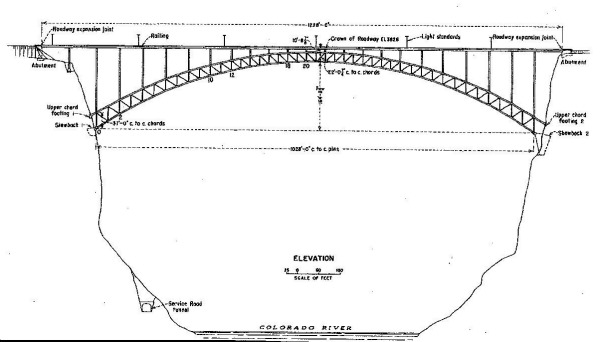 “In the authorization, appropriations, specifications, original drawings, etc, this bridge was identified as the Colorado River Bridge. However, in 1959 the bridge was officially named the Glen Canyon Bridge as an aid in obtaining a more precise location identification.”

On December 18, 1956, the Bureau of Reclamation opened the bids to build and erect the bridge.

On January 1, 1957 the contract for building the bridge was awarded to Peter Kiewit Sons and the Judson Pacific Murphy Co, a joint venture known thereafter as Kiewit-Judson Murphy.

On January 28, 1957, Reclamation issued the order to proceed, and construction on the Glen Canyon Bridge began on Valentine’s Day, February 14, 1957.

Judson Pacific Murphy Co would fabricate the bridge at their plant in Emeryville, California, pre-assemble it to ensure perfect fit and do any reaming that was necessary. The bridge would then be disassembled and trucked to the bridge-site, one half to each side.﻿ 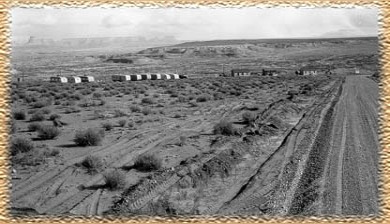 Initially, the field offices and a few trailers for the construction workers were located on the west side of the river, so one of the first things that had to be done was to build a temporary bridge to get the workers and equipment from one side of the canyon to the other. 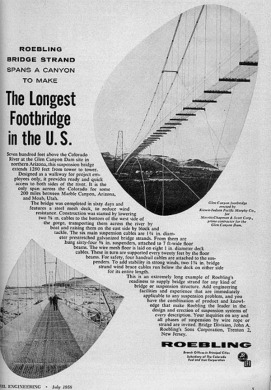 Roebling Ad in the July 1958 Issue of Civil Engineering

These in turn are supported every twenty feet by the floor beams. For safety, four handrail cables are attached to the suspenders.

To add stability in strong winds, two 1 3/4 in. bridge strand wind brace cables run below the deck on either side for its length."

The 12 1/2 ton capacity cable way was built in 60 days, and, at the time, was the longest footbridge in the United States. 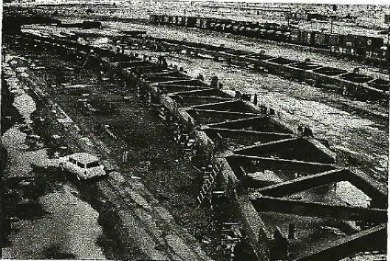 At the Judson Pacific Murphy Co plant in Emeryville, California work was being carried out on the fabrication of the bridge itself.

One Half of the Bridge Arch
US Bureau of Reclamation

However, as often happens, the best laid plans of mice and men don’t always go as planned. In excavating for the abutment on the west side, the wall was found to be structurally unsound.

To resolve this problem, Mountain States Construction Company, who had contracted for digging the right diversion tunnel for the dam, removed almost 9,000 cubic tons of material. The void was then filled with concrete.

In order to place and support the bridge arch, two 1,540 foot 25-ton capacity cableways with tie-backs were erected. Each section of the arch would be lifted into position then held in place by tie-backs.

As the arch moved out from the canyon wall, tie-back cables were attached to each newly placed section and removed from sections which had previously been placed. 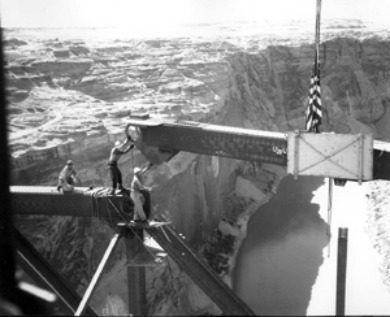 This process took place on both sides of the canyon until on August 11, 1957 the lower chord from each side was “allowed to come together and bear the load of the arch.”

After a three day waiting period, to allow the temperature throughout the arch to become fairly constant, the final sections were joined together on August 14, 1957.

“Final measurements showed that the builders were off their final assembly by only ¼ of an inch – far less than the 8 inches allowed for in the design.”

The bridge was dedicated February 20, 1959. The dedication was attended by Governor Paul Fannin of Arizona, Governor George D. Clyde of Utah, along with other state and federal dignitaries.

“A torch was used to cut a chain ribbon to dedicate the bridge. . .and hundreds of people made the trip to peer down into the spot where a dam would rise.”

Amazingly, this project of magnificent proportion was accomplished in just over two years from the time construction began on February 14, 1957 until it was dedicated on February 20, 1959.

Floyd Dominy, former Commissioner, Bureau of Reclamation in an interview with Ken Verdoia of PBS, I think said it best when referring to the Glen Canyon Dam project:

“Glen Canyon Dam was authorized in april {sic} of 1956…. And we actually started construction within six months. Why today we'd spend six months trying to find out where to put the toilets for the rock scalers."

For anyone interested in learning more about the Glen Canyon Bridge, please see some of the references listed below.
﻿

Technical Record of Design and Construction
Glen Canyon Dam and Powerplant
Prepared by the Bureau of Reclamation.
http://www.gcmrc.gov/library/reports/other/Power
/BureauOfRec1970.pdf

Glen Canyon: a Dam, Water and the West
Produced and Directed by Ken Verdoia
www.kued.org/productions/glencanyon/script/script.html