Hovenweep National Monument…
A Place of Solitude
and Tranquility

Two of these ruins, Square Tower and Cajon (pronounced Ka-Hone) are located in Utah.

The name Anasazi has long been used for the prehistoric farmers of the Four Corners. The term now favored is ancestral Puebloan, indicating they were the ancestors of modern-day Puebloans. 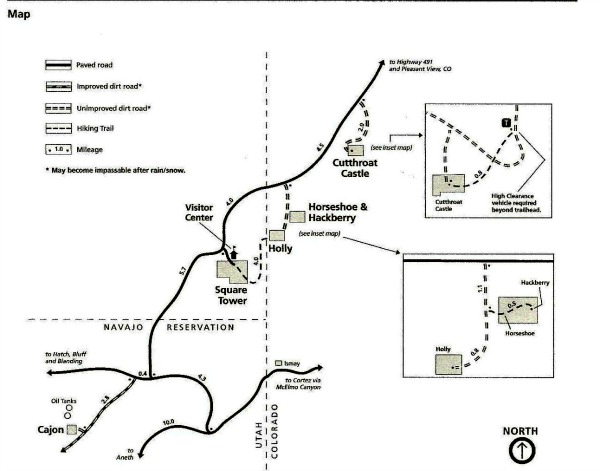 Archaeologists estimate that at one time over 2,500 people occupied Hovenweep, the name given it by author, painter and archaeologist William H. Holmes and pioneer photographer William Henry Jackson in 1874.

Hovenweep is Paiute/Ute for “Deserted Valley.”

A Place to Ponder

Hovenweep National Monument is a place of mystery and timeless isolation.

It is a place to ponder; to ask questions; to fantasize.

We have some of the answers to these questions, but there is still so much we don’t know.

We know these now vacant structures were built by ancestral Pueloans, but we can only guess at how they were used.

A Place to Ask Questions

We know these ancestral Puebloans first settled here in A.D. 900 and that they had left the area by the end of the 13th century.

We know these people migrated south to the Rio Grande Valley in New Mexico and the Little Colorado River Basin in Arizona, but we can only guess at why they left.

Was it prolonged drought, warfare, the depletion of the natural resources in the area or all of the above?

A Place to Fantasize

As you walk among the ruins, try to imagine how it must have been in the late A.D. 1200s when over 2,500 people occupied this now empty landscape.

See the women and children toiling among the terraced fields tending the crops of maize, beans, amaranth, squash and cotton.

And, from the nearby pinyons and junipers, hear the ravens and magpies scolding them for having disturbed their feast.

Observe the different groups of women sitting in the shade of their dwellings.

Here, a group is fashioning clothing and sandals from juniper bark, and weaving baskets and sealing them with pinyon sap.

There, another group is grinding maize and other plant materials with their stone manos and metates.

Listen to the sounds of quartz stone being chipped and shaped into spear points, arrowheads and tools for chopping, scraping and cutting.

Watch the master stone masons as they skillfully chisel and form each stone for a precise fit before setting it in place using a mortar of clay, sand and ash mixed with water.

It is not known for sure if the entire community contributed to the construction or if it was only done by skilled masons.

The Holly, Horseshoe and Hackberry Units are located about four miles northeast of Visitor Center.

The Cutthroat Castle Unit is about eight miles northeast of the Visitor Center and Cajon is about nine miles southwest.

Significant portions (1 to 2 miles) of the roads leading to these outlying units are unmaintained dirt and gravel; higher clearance vehicles are recommended for visiting these sites.

These roads should be considered impassable during wet weather.

The Cajon Group (pronounced ka-hone) consists of a small village situated at the head of a small canyon.

Archaeologists believe that as many as 80 to 100 people may have lived here.

A skillfully crafted circular tower, conforming perfectly to the shape of three large, irregular boulders, can be seen on the western side of the canyon.

This is the unit which receives the most visitors due to its proximity to the Visitor Center, a 31 site campground and because it is the only area accessible by a paved road.

It is named for the two-story Square Tower built upon a large sandstone boulder in Little Ruin Canyon.

Between A.D. 1200 and 1300, it is thought that as many as 500 people lived in the many dwellings scattered along the canyon rim or squeezed into alcoves beneath the overhanging ledges.

This collection of structures is the largest of those found at Hovenweep.

This moderately strenuous 1.5 mile trail, which starts at the Visitor Center, follows the canyon rim and offers excellent views of every structure.

The trail is easy to follow, but is uneven and rocky. Stay on the trail at all times.

Be aware that there are rattlesnakes in the area; watch where you put your hands and feet.

Most visitors spend one to two hours exploring the area.

Between the visitor center and the first overlook the trail is paved and may be traversed by visitors in wheelchairs with assistance.

Download a copy of the Little Ruin Trail Guide, Here

The visitor center is open daily from:

The visitor center is closed on:

All Federal Land Passes are accepted at Hovenweep. For details, click Here.

Hovenweep is part of the Colorado Plateau and, as such, can experience wide temperature fluctuations; as much as 40 degrees in a single day.

Though large snowfalls are uncommon (except in nearby mountains), even small amounts of snow or ice can make local trails and roads impassable

The widest variety of hiking opportunities is located at the Square Tower Unit.

Here a self-guiding two mile loop trail will take you entirely around the monument’s largest archeological site and provide both panoramic and close-up views of its canyon and well preserved structures.

Shorter hikes are also possible at Square Tower including an accessible 300 yard sidewalk to a viewpoint overlooking a large portion of the canyon.

There are also short hikes at each outlying site ranging from .25 to 1.6 miles round-trip.

There is a 31 site campground near the Visitor Center and Little Ruin Trail. It is open year round on a first-come, first-served basis.

There are restrooms with flush toilets and running water. The water is available only during the summer months and limited to five gallons per person.

Return From Hovenweep To Nearby Attractions