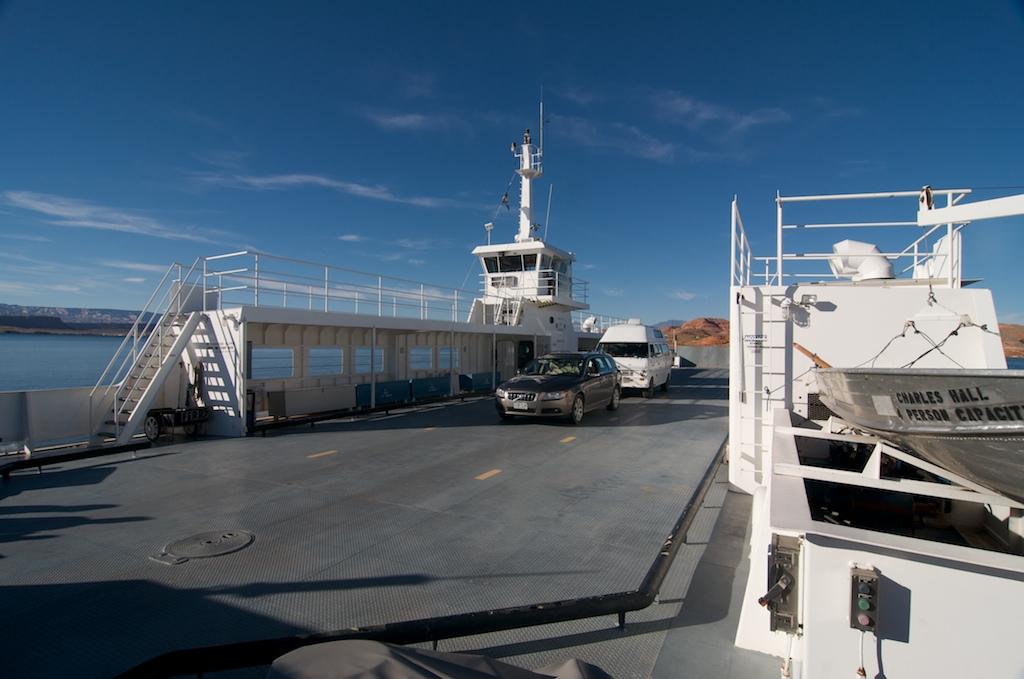 The Colorado Plateau of southeastern Utah seems an unlikely place in which to find, not one, but two state-owned ferries.

However, on a 3.1 stretch of water between Bullfrog Marina and Hall’s Crossing Marina that is exactly what you will find, two Lake Powell Ferries: the John Atlantic Burr and the Charles Hall.

The ferries operate as an extension of State Highway 276 which ends at the water’s edge on the north at Hall’s Crossing Marina and on the south at Bullfrog Marina.

The Lake Powell Ferries are, in effect, a bridge connecting the two ends.

The Lake Powell Ferries are owned by the State of Utah, Department of Transportation and are leased and operated by ARAMARK the state’s primary concessioner.

The following was downloaded from HikingwithMike.com:

Vehicle capacity is approximately 14 cars and two buses or any combination thereof.

Note: there are NO restrooms on board the ferry.

In 2000, the state of Utah funded the construction of another ferry, the Charles Hall.

In April, 2001, this new ferry, a duplicate of the John Atlantic Burr, was dedicated and put into service.” 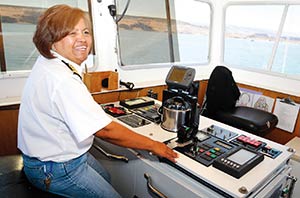 Although a duplicate of the John Atlantic Burr, the Charles Hall enjoys a unique distinction which sets her apart from her sister ship, for

"…here on the azure waters of Lake Powell, you will find a Navajo who is quite possibly the world's only female Native American ferryboat captain.”

Her name is Marilyn Haycock.

The Charles Hall enjoys another distinction in that her deckhand, Shar Redhouse, is also a female Native American.

Unless you are a student of Utah history, you have probably never heard of either John Atlantic Burr or Charles Hall for whom the Lake Powell Ferries were named.

However, both of them spent much of their lives in the area around the present day Lake Powell and were well respected by neighbors and travelers alike.

John Burr was born in 1846 aboard the SS Brooklyn in the Atlantic Ocean while his parents were sailing from New York to San Francisco.

He later settled in Utah and became a prominent cattle rancher. The present day Burr Trail between Boulder, Utah and Bullfrog was the route he used to move “…his herds back and forth between the Aquarius Plateau and Bullfrog Basin on the Colorado River…”

In the 90s “…all but the 16 miles of road within Capitol Reef was paved by the BLM.”

Charles Hall is best remembered for his role in the Hole-in-the-Rock Expedition when he, his two sons and a few other men built and operated the ferry that carried the expedition across the Colorado River.

He later found a better place for ferrying the river, 35 miles up river, and moved his operation to what is now known as Hall’s Crossing. 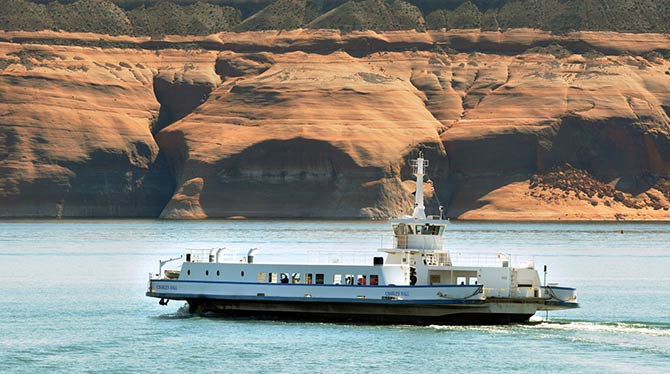 The following information about the Lake Powell Ferries was downloaded from Canyon Country:

The Ferry in effect is an extension of Utah State Highway 276 in that it connects northern and southern portions of the roadway across Lake Powell.”

FERRY DOES NOT OPERATE ON CHRISTMAS OR NEW YEAR'S DAY.

Schedule subject to change without notice.

Sometimes the schedule has changed.

Sometimes it's being maintained.

Really, you need to call right before your trip even if you called a month ago.

“The ferry was current-operated. Crossing from west to east the raft would be launched into the river, a man on each side would row, while a third one steered.

The boat would move on a slant across the river to a landing place downstream. The raft would then be laboriously hauled upstream to a point above the landing on the western bank and floated back across the river to the west bank where it was moored.

Ferry charges were approximately $5 per wagon and 75 cents per horse.”