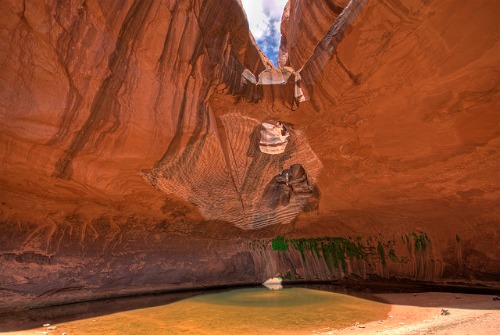 At that time, it was the nation’s second newest national monument and the second largest in the lower 48 states.

The monument encompasses an area of 1.7 million acres which is 3% of the land mass of Utah.

Grand Staircase-Escalante National Monument (GSENM) can be divided into three distinct sections: the Grand Staircase, the Kaiparowits Plateau, and the Canyons of the Escalante River.

Grand Staircase Escalante is managed by the Bureau of Land Management (BLM)which is unique in the fact that it is the only national monument or park so managed.

This high, rugged, and remote region, where bold plateaus and multi-hued cliffs run for distances that defy human perspective, was the last place in the continental United States to be mapped.

Even today, this unspoiled natural area remains a frontier, a quality that greatly enhances the monument's value for scientific study.

The monument has a long and dignified human history: it is a place where one can see how nature shapes human endeavors in the American West, where distance and aridity have been pitted against our dreams and courage.”1 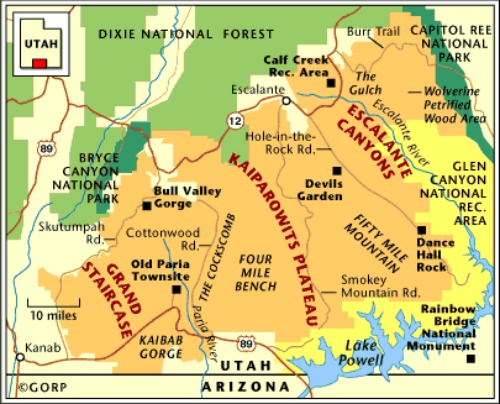 There are only two paved roads into the Grand Staircase Escalante National Monument: Scenic Byway 12, which runs east and west across the northern portion and Highway 89, which crosses a small portion of the southern boundary.

All other roads are unpaved and often very primitive.

There are no entrance fees to the monument. 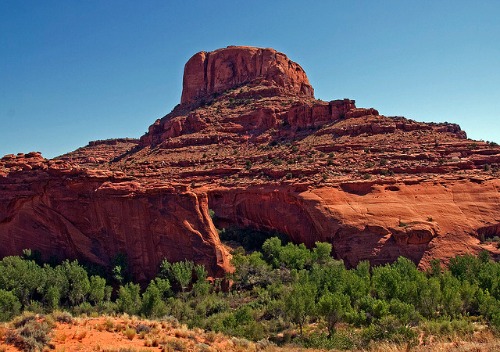 The Bureau of Land Management manages the Grand Staircase Escalante National Monument.  On their website, they list six visitor centers for the monument.

Although there is no Grand Staircase Escalante Lodge, it is possible to find lodging located within the Monument or just outside of it.

The following are the towns along Scenic Byway 12, or very nearby, which have lodging.

Kanab, Utah and Page, Arizona are located near the bottom of the Monument on Hwy 89.

Overnight permits are required within the Monument for all overnight car-camping or backpacking.

Permits are free of charge and may be obtained at any visitor center or at developed trailheads.

There are several other developed campgrounds in or near the Grand Staircase Escalante National Monument that are managed by either the United States Forest Service or the state of Utah.

If you bring your dogs to GSENM please observe the following rules:

Dogs must be leashed on the Lower Calf Creek Falls Trail and within Glen Canyon National Recreation Area.

Dogs are banned from Coyote Gulch as of April 2005.

Weather conditions and water temperatures are generally most favorable during this period.

It is impossible to predict weather conditions in the Grand Staircase-Escalante National Monument area very far in advance.

The best time to visit the Monument is late March through June and early September through October.

While you are in the area, be sure to visit some or all of the nearby attractions:

Getting Around The Park

There are only two paved roads into the Grand Staircase Escalante National Monument: Scenic Byway 12, which runs east and west across the northern portion, and Highway 89, which crosses a small portion of the southern boundary.

All interior roads except for portions of the Burr Trail and Johnson Canyon Road are unpaved, often very primitive and may be impassible if wet.

Much of the backcountry can be traveled  in a 2-wd vehicle, but there are many roads which need a high-clearance 4-WD vehicle.  The trick is to know the difference.

When the roads are wet, they are often impassable, even with 4-WD vehicles.  Always err on the side of caution. 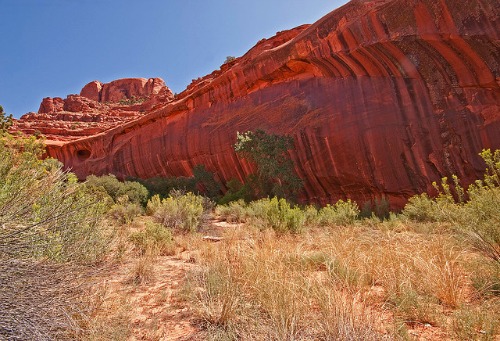 The 25 mile stretch of Highway 550 between Silverton and Ouray, Colorado, is known as the million dollar highway, a testimony to its scenic beauty.

In Utah, the 124 mile stretch of the Scenic Byway 12 between Bryce Canyon and Capital Reef is, also, called the million dollar highway, with scenery that is arguably more beautiful than that in Colorado.

“Scenic Byway 12 spans a route of 124 miles, and travels through some of the most diverse, remote and ruggedly beautiful landscapes in the country. It runs through Utah’s Garfield and Wayne Counties and is home to two national parks, three state parks, a national recreation area, a national monument, and a national forest.” 2

If you do nothing more at the Grand Staircase, treat yourself to this drive.

Side canyons and slots can have deep pools of cold water even in the summer months. Flash floods can occur any time of the year. Quicksand is common and may be waist-deep in places.”

Now that I have thoroughly discouraged you, let me say that there are some easy day hikes within the monument, and you definitely should consider some of them.

For further information on hiking within the Grand Staircase Escalante. Click Here.

Although there are no trails specifically designated as biking routes within the monument, the BLM has listed nine routes which would be suitable for mountain bikes. There are three in each of the districts, Grand Staircase, Kaiparowits Plateau and Escalante Canyons.

For more information on biking within the Grand Staircase Escalante, Click Here.

Mountain biking is not allowed on backcountry hiking routes.

All vehicles and bicycles must stay on roads. 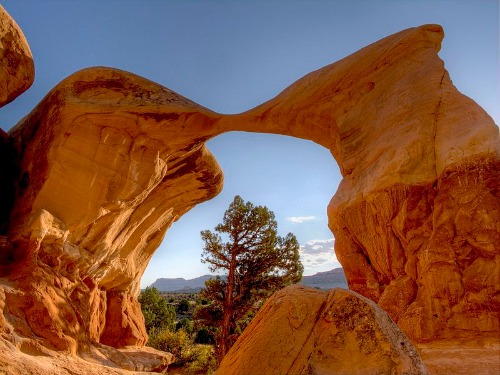 There are over 900 miles of routes available for vehicle travel.  However, off-highway vehicles (OHVs) are restricted to certain designated roads in the Monument.

The Kaiparowits Plateau contains the largest deposit of compliance coal in the United States.

In the 1960s, a consortium of Arizona and southern California utility companies set plans into motion to build four open pit coal mines and a coal-burning power plant on the Kaiparowits.

In the 1960s, a consortium of Arizona and southern California utility companies made plans to build a coal-burning power plant and four open-pit coal mines on the Kaiparowits. 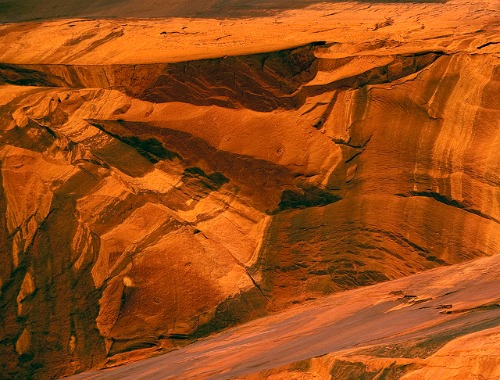 The project would create eight to ten thousand jobs and bring millions of dollars into the local and state economy.

However, many of the area residents and environmental groups like the Sierra Club, the Wilderness Society and the Audubon Society were strenuously opposed, arguing that the impact on the environment would be overwhelmingly destructive.

In 1976, after years of very contentious debate, the project was dropped; the public and the environmentalists had won.

But, this was not to be the end of it.  In 1991, Andalex Resources, Inc., a Dutch-owned company, requested permission from the state of Utah to develop an underground mine on 10,000 acres of leased land in the Kaiparowits.

Again, there was opposition from area residents and national environmental groups, even to the filing of a lawsuit by the Southern Utah Wilderness Alliance against the Utah Division of Oil, Gas & Mining.

The battle waged on until September of 1976, when President William J. Clinton signed the proclamation establishing the Grand Staircase Escalante National Monument. 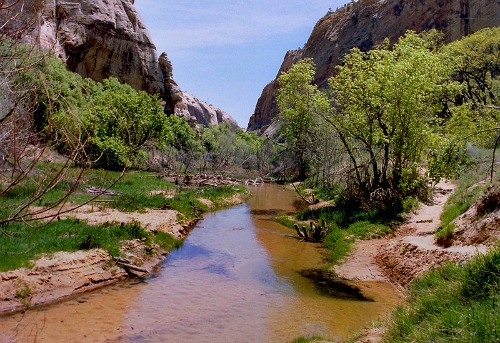 Here, again, the controversy did not end.

“…the drafting of the proclamation was not disclosed to state and local governing officials and the public at large. No one outside of a secret Department of Interior counsel, including even the governor of Utah, was informed of the impending action until it was reported in several newspapers just days before the public announcement.”3

While this action was legal under the Antiquities Act of 1906, which does not require any public disclosure, a lot of people were justifiably upset.

“Although the proclamation did not necessarily prohibit development of existing mining leases per se, the implementation of the required roads, power lines, and other infrastructural needs were very much at odds with the monument's stated purpose of preserving this "unspoiled natural area."4

For anyone interested in reading more about the geology, history and mining controversy of the Grand Staircase Escalante, I strongly recommend Land Use History of North America Colorado Plateau, referenced below.

Return From Grand Staircase Escalante To Nearby Attractions